Avery, Assists and Avoiding the Spotlight

If 2020 taught us anything, its that sometimes wins can be few and far between.  Personally, I haven’t been running as much as I should, I now have a four-foot commute to work and my skin smells like gravy.  I’ve had worries about each of my children as well.

The last couple of weeks has had a few “wins” hanging around in them.  The Jacobson girls are 5-0-1 on the soccer field and they have looked good in doing so.  This post is about my eldest daughter, Avery, whose team has won their first two games and she has been a solid part of both victories.

It should be said, that realistically, I don’t care all that much if my kid’s teams win weekend to weekend so long as they try hard and have fun.  While that is true, they seem to have a little more fun when they win.

Avery has played on a split aged squad for the last three or four seasons and until this year she was the younger half of the team.  This fall was the first time she was among the older group of players.

Those who know Avery know she is nothing if not shy.  Being the older kid in the fall didn’t have much of an affect on her game.  Despite her being as big as the other kids for the first time in years, she shrugged off any leadership role that was put on her shoulders.

This spring has been a little different.  This is not to say that she is the best player on the team or that she has suddenly become irreplaceable.  What she has done is become a “go to” player on her team.  Its little things like hearing the coach yell to “find Avery” and get her the ball or having Avery put against an opponent’s better players. 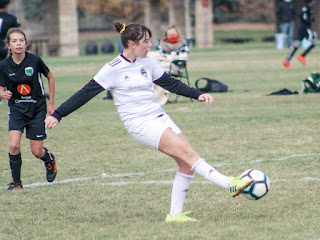 The first game of the spring, her Rapids team won 4 – 0.  Avery scored two goals, the first of which she outran the defense and scored on the far side of the net.  She looked fast and shot accurately.  The second game, her team won 4 – 1.  She had three assists.  Not bad for a young lady who doesn’t give herself credit for any of it.

The spotlight is an uncomfortable place for Avery, but maybe she needs a little.

So here it is, ladies, the point of this post.  It’s okay to have the eyes on you occasionally, especially if you’ve earned it.  Its not being boastful or too proud to acknowledge when you’ve done well.  Its okay to give yourself a pat on the back.  I’m not saying go full Brandi Chastain after each goal, but yourself a little credit is just fine.  That’s not just for soccer either.  Avery, your grades have really shined, and your artwork has taken leaps.

That goes for all of you.  Take pride in what you do and then take pride when you are successful at it. Hell, take pride if you’ve worked hard and it didn’t go your way.  Take that from your marathon running, hole-in-one hitting ol man.  (Jeremy, I know you can add a 300 game to that list of accomplishments, but that’s for you to tell your kid about).