The Riot Act And The Tolerance Thereof


Every few weeks I like to sit down and praise my children under the guise of giving them parental advice to take with them as they grow older.  Every once in a while the words that come out of my keyboard are a little more pointed and directed at their stumblings rather than their wins.   Today is one of those days.

The morning started off innocent enough.  The girls woke me up in what they perceive to be the wake-up they receive on school mornings.  It consisted of stuffed animals threatening to eat my face if I din't get up.  Pretty high-brow stuff. 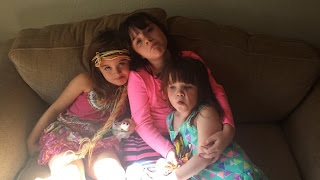 From there I let them know that I would make some French toast with an awesome caramel apple syrup that I make.  I asked that they clean a couple of rooms that they had destroyed the night before and that breakfast would be ready when they were done.  Easy enough I thought.  Best laid plans of mice and men.

While making a feast of a Sunday breakfast, the girls were quiet, cleaning I assumed.  What I found in my middle child's room was off-putting to say the least.  Instead of cleaning, the girls decided to see how much stuff they owned by putting it in the middle of the room, or at least that is what I surmised.  While my blood pressure spiked and I asked for answers I was given a lot of shoulder shrugs and "I don't knows".  The morning continued like that through breakfast and until lunch.  Most parenting books urged me to ignore my impulses to shake them silly or withhold food and holidays.  So instead, I just lost my mind and my cool and made idol threats.

Eventually, the work got done.  The house is presentable and my heart rate has returned to that of a rabid squirrel.

The lesson is this, it doesn't have to be that way.  Sometimes it is better to act preemptively.  Clean without being asked.  Do homework without the need for the riot act.   Practice soccer without having to be bribed.  I think that you'll find that you'll be happier without the yelling and the begging.  I remember my mother saying that she is not our servant.  Imagine my surprise as the same words fell out of my head.   Girls, there is some truth to that.  It's easy to fall in a rut where mom and dad pick up every dish, every stitch of laundry and remind of every homework assignment.  But here's the thing, you'll enjoy it a lot more if you do it yourself.  Beyond the quieter tone of dad, there is also the fact that completing things on your own feels good.  Doing things for someone else feels good.  Let's try it a little more often so you can know that I'm right....per usual.

Posted by chrisliam at 12:55 PM No comments:

A Bump in the Night 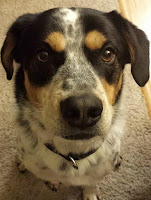 It's Five o'clock in the morning.  I'm not someone that is fanatical about sleep but I don't love being up this early on a Saturday when it isn't called for either.  I was awakened by the sound of a sliding glass door opening.  I grabbed my dog, Otto, and investigated.  We searched in the obvious places, behind doors, in closets, then the less obvious ones, like showers and in the garage and then ridiculous ones, like the freezer and kitchen cabinets.  We found nothing.  The fact that I had to wake Otto up to investigate should have been a dead giveaway, but having kids has given my already overactive imagination a steroid injection.  Thanks kids.  I'll file that panic button that kids give you as "another thing your parents don't tell you about as they are begging you to have grandkids for them".

Truth be told, if there had been a break-in it wouldn't be the first we've had here.  Back when we were the parents of  less children I was awoken by my wife whispering there was someone in the house.  Come to find out, there was two intruders in our house that night.  I was able to chase them off but not before they stole a car, some video games and my wedding ring among other things.  Something else was stolen though, something I was unaware until this morning that I even had in the first place, my peace of mind.

Without realizing it, most people have had their "fight or flight" tested over and over and mentally have a checklist of where they perform well.  For example, I know if my wife and I come up on a car accident, the victim would much rather have my wife be the first on the scene and have me go for coffee.  I don't know why, but my wife thrives in that arena, me, not so much.  I happen to know, however, there are areas where I keep a clearer head than she does.  If we have a house fire, it turns out that my wife doesn't keep nearly as level a head as she does at car accidents.  I don't know why, but the apple fell pretty far from the firefighter tree she sprouted from.

In that, I know that there was a time when I didn't panic when someone broke into our house.  I dealt with it, talked to the police for a while and went back to sleep.  Which brings me to this morning.  Why am I sitting here writing a blog post and not back in bed?  Is it because by sense of calm was broken by the people who broke into my home a few years ago?  Is it because the stakes went up as I had more kids?  Is it because I have gotten old and need less sleep?  I think the answers are: 'yes', 'yes' and 'maybe a little'.

Without knowing it, my children have given me many a sleepless night.  Without kids, the break in wouldn't have scared me.  Neither would the house fire, or traffic, or walking through a mall, or nail polish, or the ingredients of chicken nuggets.  What would never have bothered me before now has me writing  blog posts at 5:00 in the morning.

The point of the story is twofold.  To my mom, I'm sorry for all of the times I did stupid shit.  There are plenty of those times, the ones you knew about and the lions share that you didn't.  I had no idea the numbers of hours of sleep it must have cost you.  I guess that explains why you didn't let me know about those sleepless nights when I had kids.  Touché, I'll consider us even.  To my daughters; Daddy panics now.  He never did before you were born.  The balding, the grey hair, it's all on you guys.  But here's the thing, I wouldn't trade a grey hair on my head to have it any different.  That being said, just know daddy panics now.  So when you are considering sneaking out, daddy panics.  When riding your bike, daddy panics.  When you're climbing trees or playing with scissors or staying at a friend's house, daddy panics.  As you and I get older I can't see it getting any better so file daddy's panic in the back of your head for decision making purposes.  So when you think to yourself, "should I get that tattoo?" or "I think I can get to the store and back before daddy notices I'm even gone" or "I bet I can (fill in the blank)" remember your old man, and his receding hair line, and have mercy on the poor guy.
Posted by chrisliam at 8:37 AM 1 comment: