The Fourth of July has always been a special holiday for my wife and her family.  Technically speaking, I guess it is for most Americans, but her family has always had a bigger connection than I have had.

In my wife’s hometown, the entire town leaves their homes, jobs, and plans on going out to the lake and watching the fireworks display.  Being a small midwestern town they tend to lean more patriotic than the average Joe anyway and add barbecue and the spectacle of explosions it becomes a hard to resist experience.  My wife’s father and brother being a part of the fire department always meant that we got seats just a few dozen yards from where the display was launched.

If you ever get offered such a seat at a firework display, take it, don’t ask questions, don’t think, just take it.  It’s an awesome, heart attack inducing, pant soiling good time.

Anyway, back to the story.  My wife has always treated the Fourth as a much bigger deal than I have.  I don’t love parades and firework displays really lose something if you aren’t invited by the fire chief.  This year, my wife decided that we would be going to Breckenridge for the holiday and made it so we would celebrate the Fourth with the kids but then they would leave with their grandmother and then we would have a day to ourselves as well.  Nice work, darlin’.

The first thing that I realized is that Breckenridge takes Independence Day more seriously than Will Smith and Jeff Goldblum ever have.  We were fortunate enough to have Adrienne’s friend happen to be in town and giving us tips and pointers on how to navigate the holiday in the mountain town.  Without him we would have been completely lost, with him, we were just mostly lost. 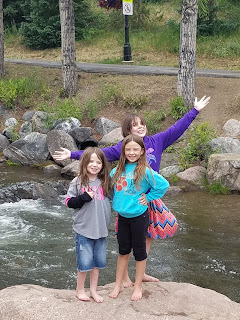 First of all, the fireworks display was cancelled due to dryness and heat.  We found out that detail on the way up, coincidentally, it was also why we didn’t celebrate the holiday in Gunnison.  Best laid holiday plans of mice and men.  The kids were minorly disappointed, but the thrill of this adventure made up for it.

It was a long trip so here’s the high notes.  Breck has a river running along side Main Street.  Tons of kids were playing in the river and mine decided to join in the fun.  Macy, my middle girl has become a bit of an environmentalist and has taken to picking up trash where ever she sees it, apparently, including rivers.  She saw some plastic stuck on a rock and decided to get it and dispose of it.  She made her way out and pulled the pink plastic from the water. She realized immediately what she had recovered and the ‘yelp’ she let out said that she wasn’t prepared for a bag full of dog poop.  I laughed hard as I made her carry it all the way to the trash.  She didn’t think it was nearly as funny.

We were told that the parade is a fun time but that you need to set up seats and claim your spot early.  Some people have a different definition of early than I do.  My wife and I went for a mountain run and then grabbed a blanket to claim our space.  We casually walked down to Main Street only to find that the entire length of the parade route had been claimed before 6:30 in the morning.  Fortunately, Adrienne’s friend had claimed enough space for his family and mine.  Thank you, Craig, you made three to four ladies very happy.

During the parade, my youngest asked me, let’s say four hundred times, for a bottle of water.  I finally relented and made my way through the crowd to find one.  It was a surprisingly difficult endeavor at 10:00 in the morning.  Between the throng of people and the fact that the only stores that were open were coffee shops with thirty people lines, meant I was going to stray further and further from our campsite.  In the end, I got the water from an oxygen bar (whatever that is) from a young woman who may not have ever sold a bottle of water before.  I got the water, but the length of the journey meant nearly no parade for me.

The rest of the day involved live music, a picnic by the river, a couple of cold pops, and an obvious display of where we had missed the sunscreen.  The next morning, we packed up the kids and sent them away to the grandparents house.

For the next 24 hours, we were free.  Breckenridge watch out.

As it turns out, my wife and I are no longer spring chickens.  Sure, we had big ideas.  We started with breakfast.  In that town, it is surprisingly difficult to find a place without a two hour wait, but we managed to find a seat at a bar in a café.  Adrienne was so bold to order (gasp) a Bloody Mary with her benedict.  That was as ballsy as we got for the next several hours.  We ate well, we drank some, we walked the entirety of the touristy parts of Breckenridge and took a gondola to the top of the mountains and took a hike.  It was a lovely time with my wife without the rigmarole that generally accompanies a family vacation.  Sure, we were no longer the rapscallions that would take a town like Breckenridge by storm we were still able to have a great time despite our lack of mischievous ambition.

The lesson here girls.  I guess there are a couple of things here.  First of all, its not a shot at you that mommy and I like to spend a day or two here and there without your precious faces around.  Think of it as a parental reset.  It doesn’t mean we don’t want you around…exactly.  Not every trip can be Disney.  Some of them can be more adult themed.  We love you, but we love each other as well.  Secondly, trips like that are important.  In the years coming, you may feel that you are too old to do trips like that.  I once thought so.  Turns out, you’ll regret the times you don’t go.   There were trips I didn’t really want to go on, but grandma was one that wouldn’t let us not travel with the family.  In retrospect, I’m glad for it, though it seemed like torture at the time.

Posted by chrisliam at 9:37 AM No comments: