72 Hours of Freedom, The Adventures of Runaway Jerry

I haven’t written for a while, at least not on this platform, but I intend to begin to right that ship over the coming weeks.  Summer makes writing tough as the houses usually calm interior becomes a hub for snack requests and shuttle runs.

Today’s story begins with my eldest’s ride to school.  My wife and Avery drove off and I sat at my desk to start working and my phone rang.  It was my wife.  Of all the things she could be calling for, I couldn’t have guessed that it was a request for a box, to house a turtle, that was walking across the road.

I pulled up and My wife and daughter were standing over a soccer cleat sized turtle.  He had made it across the street and was now trying to sneak under a fence.  We were able to corral the little guy into a box and the ladies continued on their journey.  I put the turtle and its box in my front seat and headed home.

Fun fact, turtles can escape Amazon boxes and apparently, enjoy riding shotgun without their view impeded by cardboard.  A quick decision was made to race home and wrassle him there instead of pulling over and shoving him in a box that won’t keep him anyway.

My first, and as luck would have it, only stroke of luck was that the terrapin was taller than the space under my passenger seat.  He wedged himself in for easy capture.  Very convenient. 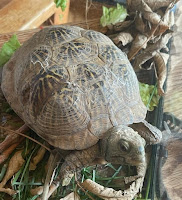 Fortunately for me, but not for its previous residents, we have an empty fish tank.  Come to find out, turtles don’t like being in fish tanks as they can’t see the glass.  A fact proven by the endless banging of the little dude’s shell hitting the sides of the tank.  While I got really tired of the banging, I had to admire his tireless moxi.

My wife began investigating what kind of turtle it was (a box turtle) and whether or not it was wild or a pet (unknown).

When my girls arrived home from school, they were excited by the prospect of keeping our new shelled guest.  They figured that if no one stepped forward to claim the turtle, then clearly, he needed to live with us.  I can follow their logic, while I am not an undeniable pet lover, I am however, a tremendous softie.

While the girls were entertaining the turtle and entertaining their odds of keeping it, my wife was searching Facebook and Craigslist and Nextdoor to see if anyone was missing, wanting, or knew what to do with a box turtle once it was in a fish tank on your kitchen table.

There was no response.

The Humane Society said that we should keep the turtle for 72 hours to make sure our search efforts had time to percolate.  In reality, I felt the good people at the Humane Society wanted to allow ample bonding time between the tortoise and my little ones.

Their plan was already working.

After several hours of kid’s laughter and some shell to glass banging our doorbell rang.  On my porch was a man, his wife and a six-year-old boy.

The man asked, somewhat meekly, “Did you guys find a turtle?”

When we produced said turtle the little boy squealed “JERRY!”

Their family was happier than mine was.  We found out that Jerry had been on the lamb for three days and made it almost a block, making them the most recoverable pets possible.

The lesson here, little ladies?  There’s a couple, actually.  They both involve sacrifice.  First, when Mommy and Avery took the time to stop and then call in the reinforcements may just have saved Jerry from becoming a road pancake.  The second sacrifice is the one where we found the owner despite the desire to keep Jerry to yourselves.  The sadness you all felt was bested only by the joy of the family who were reunited with Jerry.  Even Jerry seemed happy to see his family, if you can believe it.

All in all, the sacrifice of time that Avery and Mommy made and the sacrifice of letting Jerry go home combined to create a heartfelt moment for that family.  They had conceded that Jerry was gone forever.  Their reunion was unexpected and that made it all the sweeter.  They couldn’t have been more grateful.  Honestly, I couldn’t have been either.   You made a little boy’s year.

Posted by chrisliam at 6:29 PM No comments: