We have a saying in our house “Balloons and Goldfish”.  What that refers to, are things that are temporary and need to be enjoyed in the “now”.  It was always a way of softening the inevitable blow of a pet floating upside down in the tank or a balloon becoming a handful of latex garbage.

It also may have been a mistake.

Balloons and goldfish may offer the feeling of loss that a three-year-old can wrap their little head around.  Hopefully they move from balloons to goldfish to maybe a cat running away to a harsh breakup. 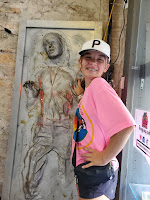 That last one is the one to focus on today.  My middle, Macy, is a striking young lady.  She is pretty, funny, athletic, has a great sense of humor and impeccable fashion sense.  She is, even to thirteen-year-olds young eyes, a catch.

A catch in the way that you expect her to be the kind of girl that wins prom queen and dates the quarterback.

The latter is in fact true, that is, true until yesterday.

Macy had a boyfriend (or a middle school version of one) who was the QB of the school’s football team.  “Had” is the functional word in that sentence.

The young QB, we’ll call him ‘Lance’ for the purposes of this story.  Lance decided he needed his freedom.  No problem. Certainly didn’t expect her first dip into romance to be her last.

The problem is twofold.  The first is that he did the deed via text.  It was out of the blue and not the most articulate thing in the world (excusable as he is only thirteen).  The second problem is his social media post saying that he is “single and taking applications”.  Funny? Sure, but I’m his ex’s dad so he’ll obviously wind up on the wrong side of this blog post.

In all actuality, 'Lance' is a good kid who dipped his toe into the dating pool for the first time as well.  He’s a stand-up guy but of course his breakup was awful.  He’s never done it before.  The nice thing was that one lesson seemed to stick with Macy.

“Balloons and goldfish” and apparently romances with thirteen year old quarterbacks are all things that don’t last.  She took it fine and the two are actually back to being friends.

The lesson here little ladies?  Its simple, boys are dumb.  It’s true, but it’s a little more nuanced than that.  Boys are dumb, but they get better.  They get better, but that’s much later.  In their early teens they are just trying to figure it all out, their bodies, their place, and girls.  In their late teens they are trying to figure out their place and girl’s bodies.  In their twenties, its college and work and moving out of their mother’s basements.  Thirties?  Figuring out what happened in their twenties.  Forties involve wives and kids and homeownership and plumbing and heating and groceries.  Fifties?  I’ve just started those and I still have no idea about girls, the ones my age or my daughters.  So, I guess I’ll speculate that boys cease being dumb in their sixties.

In all honesty, if you want a boy to like you, find a sincere one.  One that sticks up for you when times are tough.  One that respects the people around him.  One that does things for you even when it is in contrast to what he wants to do himself.  Find one that will go to the craft store with you  even if he kicks and screams the whole time and one that will take you to restaurants and movies that he doesn’t like.

And here’s the tough part ladies, be someone that will do the same for your partner.  Relationships are about compromise and sacrifice.  As you date in middle school and high school and college and in the work world, look for someone who is willing to sacrifice and willing to compromise (and one that can cook isn’t the worst thing either).

Posted by chrisliam at 1:32 PM No comments: