Who Doesn't Love the First Day of School? Avery, That's Who.


To a parent, the beginning of the school year can unveil  a plethora of feelings.  To some, it's the sadness that little Johnny is growing up, to others, the joy of afternoon freedom to sneak in an extra round of golf here and there. This year, for me it signified the beginning of a countdown; 365 more days until I am done paying for day care.  Some people saw it as a sad time, but to me it was bliss.
I felt the same about paying for formula and diapers.

I dropped off my eldest two daughters at school and felt happy.  My eldest is smart and funny and already has a nice group of friends  in her class this year and my middle daughter, Macy, has always been outgoing and judging by the conversations she started in line waiting to get into the classroom day one, I knew she would be just fine.  My youngest will start preschool in a couple of days but has already attended the school and will do great.

I dropped my girls off at school and got back in my car.  I felt something unusual for the first day of school, it was strange, I felt comfortable.  My wife and I drove to the office and talked about the first day.  We laughed about Macy introducing herself to the other kids in class and were happy that Avery had some of her best friends in her class.  Had I known what was coming I would have bottled the emotion.

That night, the girls were bouncing off of the walls when they got home.  They played in the yard and both promised that they would talk about school over dinner.  At dinner, Macy regaled us with stories of the naughty boy who got sent to the office and how much she loved her new teacher.  Avery, on the other hand, was more elusive.   She said that she liked recess, and it was nice seeing her friend Maddy, but that was it.  Red flags went up but I tried not to read too much into it.  Adrienne and I discussed it a touch before bed.

The next morning was a different story, however.   Upon waking her up she declared that she was sick and couldn't go to school.  The red flags were a deeper shade.  She then told me that she didn't want to go back to school at all...ever.  The red flags were now glowing.  I'd like to personally thank the media for putting the litany of ideas in my head of what could be wrong.  Was she being bullied?  How about a grown up?  Dyslexia?  ADD?  What could have this little girl so insistent that school was an awful place? My stomach was in knots as I tried to unpack my little girls mind and get to the bottom of what was bothering her.   The conversation was a clunky ballet of my questions and her confused answers.  "Does anyone in school ever pick on anyone else?" I'd ask, "No, the kids are really nice at my school."  She'd volley.  This dance went on until she was nearly late for school.  I felt frustrated and I had a growing anxiety towards sending my daughter off to school without uncovering the source of her discomfort. 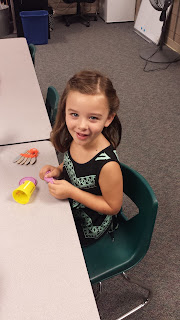 Finally, I just asked, "What is it sweetheart?  Why don't you want to go to school?"

"I don't like math.  Science is good and I love reading but I hate math." she answered with adult sincerity.
That's it.  Math.  No bullies, no learning disorders, just math.

The takeaway?  That's not as easy.  First of all, remember that your daddy panics.  For whatever reason, I am wired to think of the absolute worst outcome and then work my way backwards to the most likely.  I you have a choice, don't be that way.  Truthfully, it's okay to hate math, you still have to do it but feel free to hate it.  You can hate math, or science, or PE or music.  It's fine.  But don't let your hating something keep you from learning something fun or important.  It's all about context.  Science is a lot more fun when doing experiments and reading tends to be more fun when you pick the book.  For math, consider that all astronauts, doctors, and chefs use math.  Thinking of that may help, it may not, I already knew that and I still hate math.
Posted by chrisliam at 12:30 PM No comments:


NOTE:  While most of these postings are about cutsey things my kids do, the point is to give them something to grab onto for later.  It is with that idea that my wife makes the starting lineup for the week. 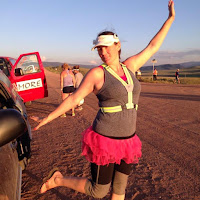 For the last few summers my wife and I have endeavored to persevere in one of the dumbest activities possible in the great state of Colorado; the Wild West Relay.  For those outside of northern Colorado or with any sense of self preservation, the Wild West Relay is a twelve man relay race that takes place in the 200 mile gap between Fort Collins and Steamboat, Colorado.   Twelve people, two vans, 30 or so hours, zero sleep, and not a brain amongst us.  My wife and I have done it a few times and for some reason it is something we look forward to.

This year, however, was a little different for both of us.  For myself, I had trained, and ran, my first marathon just a few months prior and had since been concentrating my training on elevation running.  I was feeling great and ready for my best year in the relay.  Best laid plans of mice and men.  A couple of weeks before the relay I was diagnosed with a hernia that required surgery and it was advised that I not run this sort of race with a blown out o-ring.  My wife on the other hand was having a fantastic summer...work wise.  She was working extra hours and training was falling by the way side.  It left her concerned for her ability to run the legs she had and my not being there only made matters worse.

As race day approached, I sensed the tension she was feeling.  I don't know that having a husband who thought the cure for his personal frustrations was embedding him-sized ass dents in the couch was helping matters.  As she prepared for her trip I tried to be supportive.   Of note, I know when she is nervous about a run because what she is wearing during the run becomes a subject of conversation.  That conversation was frequent.

Race day came and I uttered a "good-bye" as she was leaving the house at 4:00 in the morning and tried to call her a little while later to offer some words of encouragement that had to be preached to her voicemail.  As it turns out, cell phone reception in the canyon she was running in was spotty at best.  I really wouldn't hear from Adrienne for 30 hours. 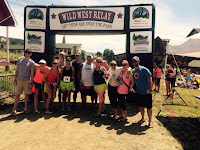 It so happens that my next door neighbor and his wife were signed up for the team too but one of the two, we'll call him "broke toe Joe" for the purposes of this story, couldn't run either.    So Broke Toe and I decided to drive up the next day and see the team cross the finish line.

The wife I found on the other side was not the same woman who left our abode the previous morning.  She was radiant, stinky, but radiant.  She was grinning wildly and only partially because of sleep deprivation.  She hadn't run her fastest, or her best, but she had run her hardest.  She had pushed herself beyond what she thought she could do.  She gave a one finger salute to that voice in the back of her head telling her that she should slow down and walk a little.  She was brimming with a confidence that I hadn't seen in a long while.   I couldn't have been happier.  Good job lady (and to the rest of Tutus and Teabags as well).