Boy, My Wife Can Straighten a Rudder


I haven’t been writing a lot lately.  I have my suspicions why.  My guess is the answer lies somewhere between a lack of time a plethora of complacency.  The time problem is obvious.  Soccer is in full swing, I’m taking a bunch of classes, I have three little girls and a wife who is starting her own real estate team and opening a new office.  Time is at a premium in the Jacobson household.

Complacency is a little bit of a different animal.  (knocking on wood) I am, gulp, happy.  The kids are doing well and so is my race training.  I’m taking classes for a career change and it has me chock full of optimism.  Adrienne’s career path seems to be following the direction she has sought.
What I know about writing, which isn’t much, is that writers need conflict. This is a commodity I have been fresh out for the last few months.  Frankly, I’m more content than I have been in the last few years.  I’m sleeping when I go to bed and generally not waking up until my alarm tells me it’s time to do so. It’s crazy, I know.

All of that being said, I was still stuck for a subject until this morning.  As I said earlier, Adrienne is starting a team and opening a full office.  It’s exciting for her but either job is a ton of work and doing both simultaneously is a situation almost too big to wrap your head around.  She has been complaining about stomach aches and headaches and confused as to where they are coming from.  Chalk it up to a ‘lightly treading husband’ moment, but I think I have the answer but not the stones to inform her. 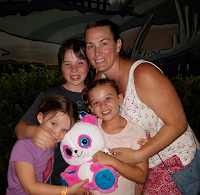 So, the subject of today’s post is my wife.  I watched her tear up this morning as a couple of more pieces of the puzzle came together.  She seems to be seeing the fruits of her hard work finally flourishing.  I like seeing her this way.  Sure, she’s exhausted and the lion’s share of taking care of the kids is slipping to me, it’s completely worth it.

It makes me look back a few years.  I don’t want to say that there have been times over the last decade that Adrienne has been a rudderless ship, but maybe it’s fair to say she wasn’t yet familiar with her life’s Google Map.  When me met, she had such an overwhelming sense of purpose she was able to help guide my ship as well.  Then was ten-ish years of different jobs and different plans.  She was always willing to apply herself but didn’t quite know which direction to apply the effort.  I know what that’s like, I’ve lived in her map-less neighborhood myself.

Fast forward to the last three or four months.  Obviously, she would prefer having unlimited time with the kiddos, she also sees the value in the time sacrifices she is making.  She has a clear direction and defined goals.  To say it differently, she reminds me of the girl I met nearly two decades ago.  It’s lovely to see her again.

Enough fawning for now.  The lesson here girls?  There’s a few.  The first is that it’s never too late to re-establish a foothold.  I’m doing it now and Mommy has already done it.  If you don’t like the way something is going, don’t be too afraid to change course.  I’ve missed out on a lot of career life being too scared to grab my life’s rudder.  The second thing is that occasionally we parents have to make choices that take us away from you a little bit.  They can be small things, like a weekend away, or bigger things, like opening an office.  Understand that none of it is done without you in mind.  A weekend away just recharges our batteries.  Opening an office or starting a team means financial security and more time down the road.  It’s hard to grasp today, but when you get to be a little older you’ll thank Mommy for what she’s doing.  I’m doing that today.
Posted by chrisliam at 1:11 PM No comments: