Its Halloween.  Sure, my daughters were excited.  Avery, my eldest, was practical as always trading out her Wednesday Adams costume for something much warmer considering the 20O  temperatures here in Colorado.  Macy, par for her particular course, dressed as a girl Pennywise from “It” despite the fact that she would undoubtedly freeze her clown shoes off.  Darby, being Darby, wound up being the same Grim Reaper that Macy was last year.  She thinks her older sisters are very cool and can’t wait to mimic anything they do, even twelve months after the fact. 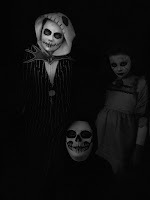 As scary as their costumes were, this post is about something much more frightening.  Its about a little thing called Sober October.  A little backstory.  I live in Fort Collins, Colorado.  We have more micro-breweries, per capita, than anyplace else in the country.  We are blessed in that capacity.  Along with delicious inebriants, I am not someone who people would describe as svelte.  Both the amazing beers and ‘Tubby Chris’ are key points for this blog post.

I was listening to a blog post featuring a few of my favorite comedians and they commit themselves to something called #SoberOctober.  What they are doing is committing to being sober for 31 days and pairing that with some physical challenge for the month.  One year they had a weight loss challenge, another was a heart rate challenge.

I’m about to go on a tangent, but it’ll make sense before too long.  I recently attended a class at the gym.  For those in the know its called “Body Pump”.  The guy offering the class was in waaaaaay worse shape than I was.  He was a six-foot-tall red headed guy that had fifty pounds on me despite the fact that he wore shorts one size smaller than what I wear.  Some people may have been put off, but I was excited.  It was freeing for me to see someone standing in front of a physically fit group and commanding their attention and action.  He gives hope to those of us that more closely resemble an arctic seal than a Navy one.

All of that being said, the podcast I was watching featured four comedians, two of which would be considered “plus sized”.  It got me thinking. If they can handle it, surely, I could.

So, I decided to not only do the “sober” part of October but also commit to a rigorous workout plan.  My intention was to work out, in some capacity, all thirty-one days of October.  Sober and sore was my intention.

Sober and sore is what I became.

I am proud to say that I was able to do a really extreme workout regimen all while not consuming a single sip of alcohol.  It may not seem altogether impressive, but I was continually sore and I was able to maintain my beer-free self through a wedding with an open bar and the 50th birthday party of a very dear friend.

Here’s the catch.  I worked out, I watched everything I put in my body and at the end of the day I lost two pounds.  Two.  Two little insignificant pounds.  A small enough amount of weight that it could be that I was just a little dehydrated when I weighed myself.  Pfffft, two pounds.

There is actually a lesson here, girls, and it isn’t to shelve things that seem difficult.  I suppose its about follow through.  I suspected for weeks that the weight loss benefit of this Autumn experiment was not going as hoped.  It would have been easy to step on a scale on October 15th and then bail on the whole thing when the results were less than awesome.

Easy, sure, but it wouldn’t have been the right thing to do.  Setting a goal, even a difficult one, can really move you in a positive direction.  Yeah, maybe I didn’t get the rewards I wanted, I still get the satisfaction of knowing I set a difficult goal (difficult for me anyway) and exceeded my own expectations in terms of effort.

Long story short, give yourself goals, tough ones, and do your best to achieve them.  I’d rather you set tough goals and fail than set no goals and succeed. That seems obvious, but trust me, as you get older, it becomes pretty easy to set a low bar for yourself and then congratulate yourself for hitting it.  So, Avery, its time to start training for that half marathon.  Macy, maybe skateboard lessons would do you some good, and Darby, my dear, you’ve tackled a lot this year, but there have been a few things that have eluded you. Let’s get to work on those.

Now, get busy little ladies, daddy is taking a nap.