Uh Oh, This One Needed A Disclaimer


DISCLAIMER:  This posting has absolutely nothing to do with anyone’s rights, Second Amendment or otherwise.  It is not a commentary on anyone’s ability to own weapons or anyone’s hatred of them.  It is just something that happened in my week, that’s it, nothing more.  I’ll wait for the hate mail.

A bit of seriousness in my generally light postings.  Something happened this week that broke something in me.  I was dropping off my two youngest children at school.  They are in grade school and being a charter school, we don’t have the luxury of a bus.  Almost every morning for the last seven years I have made the same drive.

That morning was different.  To most it would be innocuous, but for me, seeing an armed guard at an elementary school was disconcerting then and has gnawed at me ever since.

Last year I realized my oldest daughter was at a school with an armed guard but to me that was different.  It was a middle school and the guard could be there for a variety of reasons.  Fighty kids or graffiti kids or even stabby kids, plenty of reasons that don’t involve gun toting kids who feel the need to harm a bunch of their classmates.

I couldn’t make the same argument about the grade school armed guard.  To me he was there for one reason, one horrible, terrible reason.

A couple of years ago the grade school had a lockdown on the last day of school.  It had little to do with our school and more to do with the middle school across the street.  It was a bit scary, but I knew, while I was trapped in the classroom, that no one was coming through the door to hurt my children.  I remember hating that the kids knew exactly what to do.  Those first graders, for the most part, knew where to be and what to do in a very mechanical way.  I comforted myself in the knowledge that my parents had mastered “in case of nuclear blast hide under your desk” drills.  Both being useless drills that you would never need but seem to comfort a certain percentage of the populous.

I couldn’t apply that flawed logic to the armed guard at the school.  It was not a drill and those weren’t blanks in the cop’s gun.

I am quite sure that a good percentage of parents saw the guard and felt comforted.  I did not.  What I felt was a heaviness that I haven’t shaken since.  The heaviness I felt was that of change, and not for the better.  My kids, all of them, will now grow up in a world where they need protection by armed guards means that I can’t raise them quite the way I want to.

Full transparency.  I am not a gun fan.  My wife doesn’t mind them.  I don’t like them.  I imagine that there is a direct relationship between feeling uncomfortable around guns and the number of times you’ve had one pointed at you.  I’ve had three people point guns at me, two of which were in anger and the last guy wanted to show me how safe guns are (fun side note, he didn’t realize it was loaded).  Long story short, I feel like I have earned the right to be uncomfortable around them.  I don’t tell people they shouldn’t have one.

For me I don’t want my kids thinking that they need something to make school safe.  It should be safe inherently.  Their biggest fears should be pop quizzes and what is on the cafeteria menu.  Active shooter drills and armed guards change that.  It deprives them of an innocence that I want them to have.

The lesson here little ladies?  Here you go.  Your school is safe, really safe.  The drills and guards aren’t necessary.  These things, the shootings, while horrifying, are a statistical rarity.

I want you to learn all of the drills and know where the guard is stationed but I want you to know that you don’t need them until, God forbid, you do.  I remember a time in this country that we were told that Saran Wrap and Duct Tape would save us.  I filed it away in the back of my head, sure.  If anthrax knocked on my door I know I would have been screwed by my thinking that the warnings were comfort food for the simple minded.

So, pay attention, but only to the routines, not the reasons.  Please know that the world is okay.  Grandma hid under a desk to save herself from an attack that would never come, you do the same.  Learn your drills for the attack that isn’t coming.  And here’s the tricky part, you need to know it isn’t coming.  You’ll be better for it.

Posted by chrisliam at 1:28 PM No comments:


The Wild West Relay was this last weekend.  I’ve said for years that this relay is the dumbest fun thing you can do.  This year was no different.

This relay is a means of seeing friends that I don’t get to see the rest of the year, a place to push yourself a little farther than you think you should and a serious endurance test for your olfactory sense.

The Wild West Relay is a 200-mile run from Fort Collins to Steamboat Springs Colorado.  It takes place over two mountain passes and has a total of 16,000 feet in elevation gain.  We pay good money to do it.  We are not smart.

For the first time in a few years, my wife and I weren’t in the same van.  I missed running with her.  I love seeing her beat things like this.  It offered a different dynamic than I usually have.  I got to ride with my sister, some old friends and a bit of a reconnection with another one.

Here’s the thing about these adventure races.  They take you out of your element in weird ways.  There’s the lack of sleep, the hours of running, the soreness, the empty belly, the dehydration and the close quarters.  In any other walk of life, this would be torture, but here, it’s a fun challenge.

So here it is.  I didn’t run great.  I didn’t feel great.  But I had a great time.  So much so that as someone who was sure this was his last adventure race, now I’m not as certain. 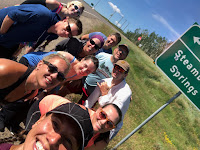 I’m sitting here writing this with incredibly sore calves and swollen feet.  I struggled through my first leg not knowing if I could finish the run.  I was dehydrated and my groin was spasming.

A friend asked me if I could run my next leg.

“Well, sure” I said because I’m an idiot.

My second leg was in the middle of the night, forty degrees and a malfunctioning headlamp.  I had minutes at a time where I was invisible to traffic.  I broke an eyelet on one of my shoes.

My third leg was the opposite, a balmy 92 degrees and this writer forgot his sunscreen.  Steamboat traffic threw rocks my way and their passing breeze felt akin to a hair dryer.  I think I forgot how to sweat after a while, and that doesn’t seem like a good thing.

I know what you’re thinking, and you’re right.  It was great.

I got to spend time with my sister and also my stepbrother with whom I am rekindling a relationship.  I spent time with a woman who whipped cancer’s ass while pregnant, a university professor who at times seems so different from me and at others could be my twin and a dear friend who has daughters just slightly older than mine.  He gave me the lay of the proverbial land as his eldest has earned her driver’s license.  Side note, I’m afraid.

We met up with our other van where my wife accomplished a leg that she had worried about for weeks.  That van was packed with new friends and old.  Those eleven people and our volunteers are why we do this and I’m not in a race (pun intended) to give all of that up.

So, the thing here girls?  You’ve watched me help put this race together for years.  I’ve complained about it and occasionally been hurt by it.  After last year I was ready to give up on it.  I literally quit in January and picked it back up in March.  Want to know why?  Because it’s worth it.  For all of its flaws and challenges, its worth it.

I get to see some of those people once a year and if a little challenge and frustration stands in the way from hanging out with them, then the fault is on me. 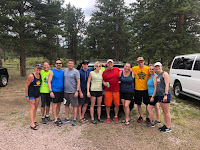 I guess the lesson here is about priority versus sacrifice.  It’s way more important to me to spend those hours jammed in a van with B.O. and foot smell than it is inconvenient to set it all up.  Running difficult legs and having sore muscles pales in comparison to the joy of dinner and beers with those people who I completed the race with.

I was talking to a friend, Mai, who talked to me about connectivity.  I’ll paraphrase.  You meet people all the time, but without connection, there isn’t anything.  If they won’t give you the time, then they aren’t worth yours.  I’m sure I messed that up.  But to me, the connectivity I offer is the sacrifice I make setting it all up.  Know what?  It’s worth it and it isn’t even close.  Now excuse me, I need a hot tub and a six pack to feel human again.