I have long thought of myself as an unlucky person.  I have used the term “snakebit” for myself from time to time.  People will say, “you’ve got a great wife” (true), or “great kids” (also true) or “at least you have your health” (well, kinda.  I’m pretty doughy).  It’s not that stuff, per se.  It’s the automotive breakdowns or golf swings or job opportunities, things don’t often seem to roll the right way for me.

That isn’t to say life isn’t good, it is.  I’ve just noticed sometimes in life that the same people seem to have amazing stories of falling into perfect situations or just having things work out for them.

So, where am I going with this?  Funny story.

I played in a golf tournament last weekend.  It was a charity golf tournament for the Rotary Club.  I played with my wife and a couple of her work friends.  It was a nice afternoon that included a couple of cold ones and a lot of bad golf.  For those who have played in scramble tournaments, you’ll know that our even par final score is well below what one would expect from such an event.  I didn’t help.

I have developed an intense case of the ‘yips’ over the last few months and it has led to a very frustrating experience on the links.  Yips aside, it was a fun, relaxed afternoon.  Frankly, it’s the most fun I’ve had golfing in a while.

When we got done, we were offered a buffet lunch.  As stated earlier, I’m a bit doughy and you don’t get that way without taking advantage of buffets.  I went through the line and filled my plate.  I blissfully sat down to enjoy my lunch with my wife but then her name got called over a loudspeaker.

We both dismissed it a bit, me thinking I misheard it, her knowing that there was another Adrienne in the crowd and guessing it was meant for her.  Surely our even par score didn’t merit any prize beyond a consolation prize for ‘crappiest team’ and they would have had my name for that award, not hers.

Then it was called again “Adrienne Jacobson”, louder, clearer and more impatient than the last time.

She got up from her plate and made her way to the tent that the voice came from.  I was curious for a moment then got lost in conversation about better golf games than mine.

A solid ten minutes passed and no wifey.  At this point I was at least peripherally curious about her whereabouts.

A friend of mine came over letting me know she was in the raffle and had gone pretty far.

That was an understatement.  The raffle was for all of the golfers in the tournament and she had made the final twenty.  Pretty exciting except for the fact that a one in twenty shot isn’t great and I had no idea what the prize was anyway.

They called ten names. Adrienne’s was among them.  I assumed she had just been eliminated.
She hadn’t.  Those ten got to continue on and then more waiting.

Some ten or fifteen minutes later they called five more names, this time hers wasn’t among them.
“Damn” I thought to myself, not realizing the ridiculousness of bemoaning losing a prize that you were oblivious to in the first place.

The five named called were eliminated.

There Adrienne stood with the final five.

Then the final three.

I was as invested as I could be in a mystery prize.  Everyone else seemed VERY excited.  What did they know that I didn’t?

Then the MC got to talking.  “The final two for the all expense paid trip to Torrey Pines golf course in San Diego.”

I perked up immediately.  It is where Adrienne and I celebrated our ten-year anniversary and we had discussed going for our fifteenth anniversary, just six months from now.  We discussed that the money may not be right to go.

“Uh-oh” I thought to myself.  Snake-bit Chris is getting his hopes up.  This is precisely the moment where the carpet generally gets torn out from under my feet.  Generally, the stakes aren’t this high.
The MC started up again.  He drew a name out of the hopper.  “If your name stars with an “A” (then a cruel dramatic pause)….you’re OUT!”

Adrienne walked off the stage, obviously dejected.  But then a funny thing happened.  The other lady walked off, too. 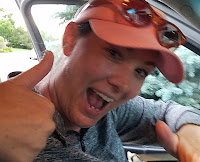 The MC continued, “Ann, you can keep walking.”

Adrienne stopped in her tracks.  She won! We Won! A snake-bite free experience.

The lesson here girls?  It’s as simple as it is self-directed.  There is no need to look at the dark side of things all the time.  It’s okay to have hope.  It’s okay to have hope even if it kicks you in the short and curleys later.  I’ve spent a lot of time in my life assuming the worst to give myself the softest landing, but there is a cost to that.  Living with negative expectations has probably cost me a lot in terms of jobs, and achievements, and writing, and relationships.

Let yourself hope big.  Sometimes even the failure is a fun ride! Granted when 1st place is San Diego and 2nd is a long walk back to your table, sometimes winning is better!
Posted by chrisliam at 11:03 AM No comments: