Darby and the Elf

Never was it more impact-fully said to me that I march to the beat of my own drummer as when my brother said it to me. That idea was the premise of his toast at my wedding reception. I have heard it several times in my life, sometimes as a compliment, sometimes not so much, but never did it hit home the way it did on my wedding night.  I would like to offer the same compliment to my youngest daughter, Darby.  Sweetheart, you march to the beat of your own drummer. 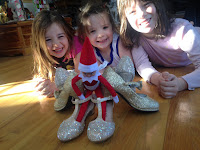 My children have been asking for a toy called the "Elf on a Shelf".  It had been a few years of asking but frankly, I hadn't got around to purchasing one.  This year, walking past an end cap in a store I made the leap.

For those without children or have been fortunate enough not to have their children introduced to this little tattle-tale, the Elf on the Shelf is a the equivilant of a hall monitor in your house.  The kids are led to believe that every night this little creature flys to the North Pole and reports to the man in red how they little darlings have performed during the day.  The kids then awake to find the elf in a new location the next morning.  The rules include the fact that it doesn't come to life until it's named and that touching the elf robs it of it's magic.

So my eldest and middle clamored to get the Elf on a Shelf and were thrilled when one moved into our home.  They named her Jingles and delighted each morning ehen it was in it's new funny location.  They began to see the error in their ways after a night of fighting with each other, but didn't let on that letting the hall monitor into the house was a mistake.

Darby had a different reaction from the outset.  She saw through the marketing of the little imp.

"That doesn't make any sense" she replied.

She was right, sure, but I had spent my thirty dollars, I wanted results.  "You don't want Jingles to fly to the North Pole and tell on you, do you?"

"She can't, she's just a toy, daddy.  She isn't magic at all." she said without an ounce of smugness.

The battle went on for another minute or two but I finally relented.  She won, and realistically I was proud of her for it.  I don't think I would have fallen for the Elf on a Shelf when I was a kid.  I'm glad the elder two went with it, but it doesn't bother me at all that Darby didn't.

So the lesson is this, girls.  There will be times when people are going to tell you things that simply aren't true.  Your mother would tell you that I am the biggest culprit in this.  But here's the catch: sometimes they will tell you these things to make life a little more interesting.  You might be tempted to call them lies, I prefer 'being creative'.  If you get the chance to buy in, it's worth it, if you get the chance to create the story yourself...even better.  Merry Christmas, girls.  I hope Santa brings you everything you want!
Posted by chrisliam at 10:11 AM No comments:

You Say It's Your Birthday


For whatever reason, perhaps it's the ever expanding bald spot, I don't particularly look forward to birthdays.  This year was no different.  My wife was out of town helping look after her grandmother after a surgery and I had a lot going on at work.  I had decided to go into work early that day as I thought I might be able to get out a little early to have dinner at my mom's house and spend some time with the girls.  The best laid plans of mice and men...

With my wife leaving town for the week we thought it best my mom have my wife's maxi-van.  This simple switch left a comet trail of ramifications.  I'm not entirely sure how it happened, but we will speculate to say that the gods were conspiring against me, to make sure that I had the van and would trade out the van for my car later in the day.  Simple enough, right?  So I left my house with the sun not yet making its first appearance and it was cold enough that a man could have lost his bearings.  I scraped windows assuring myself that it was worth it.  "Scrit, scrit, scrit", the ice scraper bounced along the frost.  A lesser man would have started the car and let the heater defrost the windows while he enjoyed a cup of coffee warm inside.  The thought had crossed my mind, but my day was a full one and getting to work a couple of hours early would make all the difference.  I hauled myself inside and made the slow icy trek to work.  It took a little longer than usual but I had still given myself an extra hour and a half to get assignments knocked out and would be on my way surprising the girls in no time.  The best laid plans of mice and men...

My wife used to work for the same company as I did so clearly a key to the office would be...sonofabitch!  I lugged myself back in to the van to make the trek back to my mother's house to retrieve my key.  Traffic, as it turns out, was slow in both directions, go figure.  I arrived at her door, woke her up, recounted my story, set a new time for dinner and made the slog back to work.  After a stop for gas I arrived at the office to find the front door unlocked.  My co-worker Lindsay had an equally busy day and decided to come in early, about an hour early as it turns out.  I was now officially twenty minutes early.  Not a ton of time but hey, it's my birthday, maybe the gods would take it easy.  Best laid plans of mice and men...

In the spirit of expediency it will suffice to say that the rest of the day did not go as hoped.  I ended up leaving work later than usual, got caught in more traffic than usual which left plenty of time to have it explained the effects that my tardiness would have on dinner and it's moisture content.  I also had retrieve my daughters from my house where it was explained that my dog had eaten my birthday cake during nap time.  That is actually the second birthday cake ol' Otto has eaten over the years.  Par for the course on this day.  I loaded the girls into the van and headed to my mom's house.

A funny thing happened over dinner.  I laughed.  The girls gave gifts, all of the handmade or dollar store variety, they beamed with pride.  The unfortunate parts of my day melted away.  Sure there were still worries, my wife decided to extend her stay as Grandma Bert saw a few complications (she is headed for recovery) and my plate at work was still full the next day.

The lesson, my girlies, is this: what happens at home is what matters.  It is what will make you happy and what will make you sad.  You may think that school, or work, or sports, or whatever is in life's minutia is what defines you but it is actually what happens behind your front door.   To an outsider looking in my birthday may have looked like a flop, and for several hours, it was.  But when placed on the scales, the joyous parts carried a lot more weight than the tail feather ruffling parts.  Thank you girls and get well soon, Bert!
Posted by chrisliam at 8:01 AM No comments: