A Stargazer Is Born

This afternoon I had the pleasure of attending my eldest daughter’s musical.  I have heard that as these performances become more common, and longer, and more full of musical solos, my opinion may change, but for today, it was great. 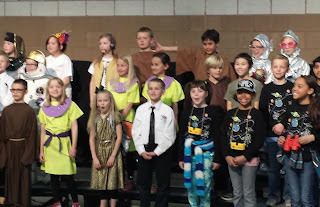 The lead-up to this play started in early December when, much to Avery’s chagrin, she didn’t get the lead.  Instead of the coveted role of "Twinkle" Avery had been resigned to "Third Grade Stargazer".  If she were to have been honest this morning, I’m quite sure that her gut emotion would have been relief at the smaller role, and at 12:45 this afternoon, my gut would have agreed.

I was speaking to another parent about the show.  He, like me, remembers the annual schools performance of our day being A, Christmas themed, B, in the evening and C, the most boring event you could have forced grown-ups to sit through.  In all my years of St. John’s Elementary theater, I remember having exactly one line of dialogue; it was a cheeky pun involving Joshua fighting the battle of ‘Geritol’.  Just a little highbrow theater for the parents and grandparents.  I later went on to appear in several productions at the Lincoln Center in Fort Collins with its apex being Grasshopper #2 in “Once Upon a Clothesline”.

It was different today; there was lighting, and costumes and production value.  I’m not saying I’m running out to buy the soundtrack or the director’s cut or anything but it was a far cry from my school theater days.  Then there was Avery, and apple that fell fairly close to her Grasshopper father’s tree.  She was great.  I truly believed that she was a Smart-Alec third grade stargazer.   She did her lines, sang her songs, moved to the choreography.  Like the other parents in the room, I was very proud.  My favorite moment was at the end of the show, when the kids took a bow, my daughter beamed.

It's a pride I love seeing in her.  To my experience, a lot of kids will beam like this for things both benign and manufactured.  Even in my house I hear a lot of "look at me, look at me", even from Avery.  But for Avery, this kind of glow is reserved for things deserving of it.  Today was one of those days.  Her glow was real.  I couldn't have been prouder.  To be honest, all of the kids were great.  While I would have liked Avery to get the part, the little girl who played Twinkle was impressive, too.  It was a far cry from the Third Wise Man that I had played, and day and night from the Second Wise Man, who if I am remembering correctly, had to leave the St. John's stage to have himself a vomit.

So the lesson for the girls?  It's Avery's lesson, really.  When you want something, it may not go 100% your way.  Your soccer team may lose, you may not get an "A" on a test you study for and you may not get the lead in the school play.  At the end of the day, it's what you do with the opportunities you get.  You may have only got the part of "Third Grade Stargazer" but you were the best damned Stargazer you could be.  You worked your little tush off and the results were obvious.    To be honest, though, you were great up there, but the game was rigged.  Coming from a Dad with the Grasshopper #2 acting chops that I have, you couldn't help but succeed.
Posted by chrisliam at 8:14 PM No comments:

The Denver Broncos and My Personal Sports Neutering

Sort of torn this week. The Broncos won the Super Bowl and this made my kids, my wife and her family very happy, and honestly, I’m truly happy for them. This is a major softening of a stance I would have held five or ten years ago. There was a time where my Oakland Raider loving heart would have derived as much joy from a Bronco loss as it would have after a Raider win. That has changed over time, but the disturbing thing is while this years Super Bowl was going on, I was doing laundry, doing dishes, cleaning and such.  The Broncos winning the Super Bowl should be bothering me, Macy dressed in Bronco gear should bother me and damn it, doing dishes during the biggest game of the year should bother me!

What has happened to me? I used to be into sports to an uncomfortable degree. I had a sports blog, I worked in a sports bar, and frankly, I wouldn’t miss an event. Imagine my surprise when I discovered I wasn't cursing Denver's defense, hell, I wasn’t even actively watching the game. There was a time when I threw Super Bowl parties and now a sink full of dishes seemed every bit as important as the game.

To some, this would just seem like maturing, but in reality,  it's a neutering…sports-wise. I tried to track back when the change occurred.  Let's see,  I have no idea what my college basketball teams record is, I don’t know where my baseball team finished last year, my fantasy teams have been getting progressively worse year in year out, clearly this has been going on for a while. Perhaps it’s the overflowing estrogen that my wife and three daughters have pumped into my home.

I was discussing this “problem” with my friend Dave, looking more for an explanation than a solution. What I came up with is this, the more sports and activities I participate in, the less I care about the activities of others. Is it that simple? I don’t know for sure. But I can say this, I used to enjoy college football, but since I started coaching my girls’ soccer teams, I can’t remember the last time I watched a game. Saturdays are soccer days now. I generally reserve my longer runs for Sundays which eats into Raider day, and they’ve been so bad for the last two decades, I’ve hardly noticed how we’ve grown apart. Then there is golf league and soccer practices and camps and everything else that goes along with a dad who likes his girls participating in sports and is also trying to minimize the expanding waistline that seems to have accompanied fatherhood.

Then I thought about the successes of the teams I follow.  I have had one team that has won a championship in the last 30+ years.  Syracuse won the national championship in 2003, that's it, thirteen years ago, one stinking championship.  Maybe that's it, my wife loves the Broncos and loves Duke Basketball (ugh).  That means she has celebrated more championships in the last calendar year than I have since Reagan's first term.

Here's the catch, be it futility or estrogen or just a lack of time, I'm actually better for it.  So girls, here's the nugget.  You'll hear me joke about the Raiders and the Broncos and Daddy will still take you to Coors Field during Rockies season, but take it all with a grain of salt.  I've seen both sides many times over and believe me, it is far more entertaining to lace up your cleats than it is to watch someone else lacing up theirs.  Get out there, get dirty and do your best.
Posted by chrisliam at 8:42 PM No comments: