Ten Goals in a Half? Seems Like a Lot!

Two of my daughters played in a soccer tournament this weekend, my middle, Macy and my youngest, Darby.  Macy is a very accomplished soccer player and her team is more than competitive.  Per usual, Macy left the tournament with a medal, albeit silver, much to her chagrin.

But this post isn’t about made goals and wins, not off any of my kid’s cleats, anyway.

To the uninitiated, a team is a team is a team.  Any given day, any team can win.  In a perfect world, sure, but anyone who endured 2020 knows the world isn’t perfect.  Because of the imbalance, every league splits its players into different tiers based on ability.  For example, my middle daughter plays on the “gold” team which is tier two only behind the “select” team.  Below Macy is the “white” team and below that is “blue” where Darby plays.

See, Darby, while enthusiastic, hasn’t hit any brand of growth spurt yet and tends to be slower and less physical than most of the other kids.  She tends to be behind the play as it migrates down the field.  It doesn’t matter all that much.  She’s having fun and she will catch up.

The problems, for the point of this story, are that A) Darby has started playing goalie and B) the first team they played in the tournament was a “premier” level team.  A premier team is the equivalent of the highest-level team in the tournament.

It was a recipe for disaster.

Anyone waiting for the “David versus Goliath” ending might as well stop reading now. 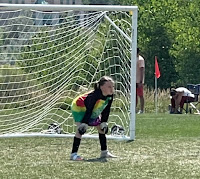 Darby was in goal for the second half of the game.  The team was already down 3-0 when she took the net.  They were behind big and it got much, much worse.

Darby would allow ten goals in the second half.  She was outmanned, as was her team.  There was a sense, as the half went on, that the girls had to endure the drubbing they were taking but their willingness to fight back waned.  The less the girls fought, the worse it got for Darby in the net.  It was no one’s fault.  They ran into a buzz saw and there wasn’t a lot they could do about it.

The worst part about it was the other team.  The most politically correct way to describe these 11-year-olds would be “snarky little shits”.  Literally the kindest way I can find to describe them.

The girls made jabs at Darby.  As the goals mounted, the jabs got worse.  The team would rip a goal past Darby and mock her with a sarcastic “nice try goalie” then “it’s like you’re playing for our team”.  It was audible to the parents.  It concluded with a penalty shot that went off Darby’s fingertips and left her in tears.

The game ended 13-0. After the game, Darby was a hybrid of angry and embarrassed and sad.  She asked if she could skip the rest of the tournament, and truth be told, we were tempted to let her.  Deep down, her mother and me knew that was the wrong thing to do and we sent her back into the fray.

It felt like bad parenting.  It was a feeling that would be exacerbated watching Darby putting the goalie jersey back on for the first half of the next game.

“You’ve got to be joking” I thought to myself.  “Yesterday wasn’t bad enough?”.  I was hoping that she would be put in midfield where she could blend in and just get by.  Instead, what happened was remarkable.

She was stopping balls.  Her team was scoring.  At the end of her half, the team was up 3-0.  She didn’t play goal in the second half as it was someone else’s turn.  When the game ended, she was happy. I was relieved.

The lesson here, ladies?  There’s a few.  The first is this: don’t let someone else take your joy.  Those little girls, and their snarky little selves, made you want to quit.  Screw them.  I’m proud of you quieting the noise and playing again. Secondly, be brave.  I took stones to go back on the field.  The fun you had with your teammates over the last few days is directly attributable to the bravery you showed going back on the field, back in the net and back in the line of fire.  I couldn’t be prouder of you.  I’m sorry I doubted you. I’m glad you went back to goalie.

Finally, it’s about those sardonic little shits on the other team.  Maybe you didn’t get the chance to shut them up (nor did anyone else as they outscored their opponents 33-0 in the tourney).  Every team, and I mean every single one, gets their comeuppance at some point.  Any team that behaves the way they did will not handle losing well.

Your team hugged and consoled each other.  You had a water balloon fight.  You ate snacks and played with your teammates.  Winning as a team is easy, losing as a team can be harder.  There was no blame between one another.  The lesson is to be a gracious winner and an optimistic loser.  This weekend your team was both.  You won a couple; you lost a couple and you had fun.  Seems about right.