Somehow, I Made a 200 Mile Race Less Fun

A few weeks ago I participated in a race called the Wild West Relay.  For those who don’t know, the Wild West Relay is a 200-mile relay race from Fort Collins to Steamboat Springs Colorado.  For most teams, the race takes about thirty hours and is riddled with pulled muscles, insomnia and foot stink.  We pay for the privilege to run it.  We are not bright.

Most of the runners have been with us for years.  We’ve had husband/wife tandems, brother/sister and this year we even had a father/ daughter.  We’ve had lawyers, restauranteurs, students, bartenders and bird rescuers. The common thread for all of us?  Running perhaps?  Nope. Morons, one and all.

Its something that I look forward to every year.  This was the eight year I’ve run it.  We have a few runners that are in their tenth or eleventh year.  It’s a chance to see friends that we don’t get to see often.

For some reason, this year, my heart wasn’t in it.  I hate to say it, but I literally spent more days trying to get out of the race than I did training for it.  It showed.

For a twelve-man team, each runner runs three legs ranging from a few miles up to ten miles each.  My legs added up to approximately 16 miles and each of the three legs were vastly different from one another.  My first leg was a short but very uphill leg that is considered “very hard” by the race organizer.  I struggled more than I expected.  It was at around 8000 feet and there was a lovely combination of a headwind and smoke-filled air from a nearby forest fire.  It was no fun.

My second leg started around 3:00 in the morning and was a seven-mile leg with rolling hills.  The only issue with this one was the fact that my headlamp kept quitting on me.  Running around in the mountains with passing traffic, no shoulder and no light provided more than a couple of pant soiling moments, but I think fear sped me along and made for my most enjoyable leg.

My final leg was the one that will stick with me for a while.  It is a five-mile leg that starts at 9000 feet and loses 1800 feet by the finish.  Sure, a nice downhill run is great.  This isn’t that. This is just gravity at work.  You set off and hope for the best.  I’ve run this leg once before and despite being my fastest five mile run I’ve ever had, I hated every step of it.  This year was much, much worse. 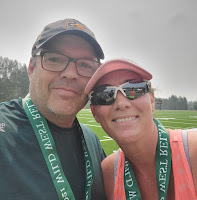 My first mile was fine, fast actually.  The first mile had a 7:30 pace.  Anyone who knows me knows that is uncharacteristic at best.  Just after the first mile I felt a ‘pop’ just above my knee.  At first it was uncomfortable more than it was painful.  Discomfort was a sensation that would last only another mile or so.  Discomfort gave way to an achy pain that seemed to grow step by shitty step. My miles got slower, 8:30, 9:00, 9:30 and then a 10:30.  My knee was killing me. To run that last mile at a 10:30 pretty much defies physics.  Near impossible to fall down a mountain that slowly. I had a tough time walking by the time I was finished and wouldn’t run again for nearly a month.

I’d like to make excuses, but it comes down to two things: 1) I didn’t want to be there and 2) my pre-race training reflected that.  While I enjoyed seeing everyone, this was not a banner job for your tubby writer friend.

The lesson here, little ladies?  It’s a good one.  If you commit to something, commit to it.  Wrap your mind around it and do the best you can and apply yourself.  Here is the part where I could say, you’re part of a team and you owe it to them to do your best, which is a fair but obvious point.

There is another, far more selfish reason to commit.  I got hurt, I would wager, because I hadn’t trained well enough.  I hated my first leg for the same reason.  In the spirit of self-preservation, if you are going to commit to something, its best to be in a position to keep yourself from hurting yourself while doing it.  That is a brand of “lazy tax” that you should be reluctant to pay.  I paid that lazy tax for hours.  I can tell you, I’d have been happier if I had trained, or given my spot to someone else, or faked an injury or manufactured a real injury or paid someone else to run.  But I didn’t.  A lesson I won’t soon forget, at least until my next race sign-up.

Posted by chrisliam at 5:24 PM No comments: