My Dad wasn't a Great Golfer, But That's Okay

My dad was a crappy golfer.

I spent round after round with him playing golf.  I took golf vacations with him. He never really got better.

I tried to help him. It was about weight transfer.  It was that he lifted his front foot and was inconsistent on his swing plane.  None of it really stuck.  But he kept plugging along.
It was actually during a golf trip in Florida where he told my brother and me about his diagnosis.  He then called my sister and told her as well leaving my brother and me to discuss the ramifications of what we just heard over beers in an open-air sports bar.

Dad seemed relatively cavalier about it when he told us.  He said that the brand of cancer that he had was very curable and that he would be fine.  He talked to my sister and came back to the table.  He was more upset after talking to her.  A bit of the confidence faded from him.  My sister had that affect on him.

This isn’t about my dad’s cancer diagnosis.  Its about golf and my father’s inability to hit a golf ball consistently.  Dad took lessons and made some strides, but muscle memory would take over and his bad swing would return.  He was a very strong, healthy guy.  He lifted weights and ran daily.  It wasn’t a physical issue.  Like all of us, bad habits overruled his good ones as it related to his golf game.

I suppose the questions becomes, “yeah, he wasn’t a great golfer, why write about it on Father’s Day?” 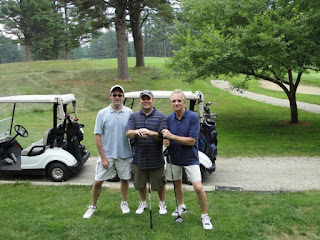 Here you go.  Dad was a bad golfer but kept going because it was a means of meeting his sons where they were.  He took time and absorbed great expense because it gave him a chance to hang out with his kids.  Frankly, those were some of the best times with Dad.  As I’ve detailed before, in my younger years we didn’t always get along.  He was very structured and very business minded.  I tended to be a free thinker and ideological.  But on the golf course all of that faded away.  We were all relaxed and funny.  It was literally my favorite times with him.

I sense it’s why he played fantasy football as well.  Every year he stated how little research he had done and leaned heavily on my brother and me for advice.  That meant phone calls for the entirety of the season.  Phone calls with no politics, no history, no arguments. Just football.

My sister had this same bond with him as it came to running and travel.  He understood her drive to run long distances long before anyone else in the family did.  I would think that I’m not stepping on her toes here.  I remember her saying last year that the thing she missed most about dad is her post race phone calls to him.

He was a great runner.  He was a crappy golfer.  He did both to meet his kids where they were.
The lesson here, little ladies?  Grandpa was a lot of things; a great golfer was not one of them, but a proud guy was.  He was a proud guy but was willing to set that aside to golf with his kids.  So, while we may not have seen eye to eye when I was younger, my dad made strides in his later years of bridging any gaps we had.  To my credit, I made my own moves to meet him in the middle.  Obviously, neither of us were completely innocent all of those years ago.

It took me a long time to figure out the golf part of all of this.  I couldn’t figure out why he was always the one proposing golf.  I think I’ve got it now.  He didn’t need to be good at golf to enjoy the time together. I think he enjoyed his kids most when we all let our guards down and the times we did that best was when we were running, or traveling, or drafting Ryan Leaf in fantasy football or even skulling a 7-iron.
So, Happy Father’s Day, Dad.  Hopefully, you’re up there hittin’ them straight, or at least visiting the 19th hole.