Last weekend was the Wild West Relay.  For those out of the know, the Wild West Relay is among the dumber activities that one can participate in and is one that pushes its competitors physically, mentally and olfactorily.  It is a 200-mile relay race from Fort Collins to Steamboat Springs, Colorado.  The race takes a team of twelve runners through the night and over mountain passes.  Its fun in a “passing a kidney stone” sort of way in that the real fun is upon completion.

For our team, Tutus and Teabags, I am our captain, serving my third year in the role.  As it turns out every captain we have had has served exactly three years in the role.  The first year you are just trying not to mess everything up, the second year you try to fix what went wrong in the first year and in year number three you recognize that there is nothing you can do to make it go smoothly and resign.

This year was rougher than usual.  Every year I try to get an assembly of ‘alternate’ runners.  These are runners who kind of want to run but definitely want to be forced into it.  Invariably there are runners who drop out and its nice to have two or three people that you can guilt into the role.

This year we had three alternates.

We had three drop outs.

All three alternates rethought their commitment to being an alternate.

No hard feelings to any of the dropout runners or the alternates.  For the first time ever, every excuse was a good one.  There were no bat mitzvas, no birthdays of a second cousin twice removed, no Disney on Ice tickets, no Steven Segal book signings.  It was injuries, business travel and one kind dad who learned his daughter had signed up for the race and wanted her first time running it to be with her old man.  I get it.  Every single person.  But it still sucked.

We start planning for the August relay in January.  This year we found our last runner six days before we departed.  It created a logistical nightmare with no one knowing what they would be running or who they were running with.

Then there was the race itself.  In addition to start setting up the race in January, I also began training for it as well.  I dutifully ran between fifteen and twenty miles a week for seven months.  I felt strong and ready.  The best laid plans of mice and chubby men.

One by one I watched runners take off and complete legs.  Being runner eleven, I wouldn’t run my first leg until late afternoon despite the team starting at 6:30 in the morning.  I watched my wife take on the most difficult leg she had done in her race history and push herself beyond her limits.  She did fantastic.  I watched my sister find a gear that she generally doesn’t find and go beyond what she has done historically.  I was truly impressed…until my leg.

My leg was a difficult leg with a lot of elevation gain.  No matter, I trained for it.  I literally ran a leg with more elevation gain the weekend before and beat my desired time by a minute a mile.  What could go wrong?  Answer: everything.  I felt tired.  I felt nauseous.  Honestly, I felt like quitting.  I came in later than I wanted to, five minutes later to be exact.  Five minutes late on a five-mile leg.  The math is simple.  I felt like ten pounds of poop stuffed in a five-pound bag.  I was upset but I had two more legs.

Whelp, my second leg was more of the same.  Struggled.  Felt ill.  I felt tired.  I failed to come close to my goal.  The Wild West Relay 2018 was proving to be a roaring success for those around me, and landing with a thud for the captain.

My last leg, as luck would have it, was a sloshy one with bits of rain, bits of hail and alongside a busy highway.  I did well, truth be told.  I exceeded my newly low set expectations.  It was a silver lining on a crap colored weekend. 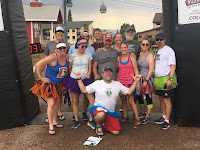 I wasn’t happy with myself, but I couldn’t be prouder of my team, my wife and my sister.  On a side note, every woman that ran with us far surpassed their expectations.  Nice job ladies.

At the end of the day, I was unhappy with the way my race turned out but thrilled to see my teammates do as well as they did.  It’s a fair trade off.  I too am retiring as captain of the relay team.  The title is up for grabs, just text me!

The message ladies?  Its pretty straight forward.  I trained, I practiced, I busted my ass to be ready for the relay.  I woke up daily before the sun came up to make sure that I had time to get a run in before I had to take you to school.  And in the end, I failed.  Here’s the catch: I failed to hit my goals, but in training, practicing and busting my ass, I win.  I left whatever I had out in the roads.  I literally thought I was going to vomit my way through my first legs.  I didn’t put my miles on anyone else.  I did them, slowly, but I did them.  The other thing?  Mommy and Aunt Jen killed it.  A good teammate may not do as well as they want but still revel in the successes of their teammates.  I could have cried as Mommy came over the top of her first leg.  I watched Aunt Jen, a super steady runner, push herself and have the best relay she’s ever had.  My happiness for them far outweighs my disappointment in my performance.

Now get out there and put in miles of your own.  Avery, just seven short years before you are eligible to compete!

A bizarre side note.  Bombas socks are the greatest running sock ever created.  I tried them for the first time over the last few weeks and couldn’t be more impressed.  I have no connection to the company but know a lot of runners who complain about their feet.  Give them a try.  Every pair you purchase they give a pair to the homeless.  Good for your feet and good for your fellow man.  It’s a pretty good deal.
Posted by chrisliam at 10:49 AM