Fools Gold? Macy May Think So

Macy, my middle one, is the most brash of my three girls.  She is the most physical and the most competitive.  In this vein, she has a lot more of my wife in her than me.  My wife’s legend includes single handedly beating up a football team and challenging guys that brag of their basketball skills to one on one competition.  I, on the other hand, picked daisies in right field until my early teen years.

She is a very physical girl, one who is as likely to solve her problems with her fists as anything else.  When it comes to sports she is competitive and recognizes when she isn’t doing well and has a strong distaste for losing.  Those who are asking "what kid isn’t like that" should meet me or my eldest, we both enjoy being out on the field but winning and losing isn’t as important as trying hard and post-game snacks.

Back to Macy.  While she is a very strong kid, she is also the most delicate of my girls.  She is the most apt to get her feelings hurt and the most likely to realize when she has been treated unfairly.
Every element of her competitive personality got tested this weekend.

Macy’s team had a soccer tournament called the Boulder Cup.  It was a tough tournament and her bracket looked to be a steep climb.  She primarily plays defense and the teams in the tourney looked like they could score.  It looked to be a long weekend for my little one.

The first game Saturday was against a very good team from Boulder.  They put a lot of pressure on the defense, but they held strong.  Macy’s team, the Mustangs, would leave with a 3-1 win over the hometown team.

Their next game was against the tournament favorite.  They were a team from Denver who were bigger and faster than the Mustangs. They were extremely physical, and the game was marred with tripping and pushing.  There was a verbal altercation between some of the parents that may or may not have included my wife. Did I mention that she is competitive, too?  When the final whistle blew the game finished 2-2.  They played well, but in this tournament, a win and a tie would not get you into the finals.  They would have to play lights out soccer on Sunday.

We took Macy home for some well-deserved rest.  She had played all but five minutes in the two games and was exhausted.

The next day, as the games were being played, the teams that should win, won, and the teams that shouldn’t, didn’t.  The Mustangs could have used an upset or two in the tournament, but they didn’t happen.  When it came time for them to play they would need to win, score at least three goals and shut out the other team.  If they did all of that, they would most likely be in the finals.  They did all of that and more.  They played at another level.  When the game ended the score was 5-0 in favor of the Mustangs.  Macy played every minute.  She was tired but proud of the fact that her team needed a shut out and she helped provide one.  The Mustangs were in the final.

As the bracket shook out, they would have a rematch against the Denver team that left them bruised and battered.  Privately, many of the parents knew that they would be taking home silver medals that weekend.  Personally, I began mentally formulating the “second place is great” talk.  When the game started it was fairly apparent that my speech preparation was well warranted.

Macy only played five minutes of the first half and played mid-field, a position that she is very unfamiliar with.  At halftime the score was 1-0 and the Denver team looked much better than our girls. 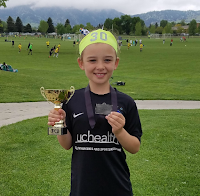 Macy started the second half on the bench and when she did finally get in, it was again at mid-field and this time it was only for three minutes.  The Denver team kept their lead until there was five minutes left.  The Mustangs scored and frankly the Denver girls looked rattled.  A minute later the Mustangs would score again and the game would finish with the good guys winning and taking tournament gold.
Unfortunately for Macy, she would celebrate the win from the bench.

She was happy, but in driving home, it was obvious that something was wrong.

When we got home I needed to go to the grocery store and Macy asked to join me.  Not for any love of me, but because they have a claw machine and she has a unique gift of pulling prizes on the regular.

We loaded into the car and I asked how she was doing.  I meant physically as she had played almost three entire games in two days but her response caught me off guard.

We talked for a while as we shopped and she explained that she was confused as to why she played a different position and that she thought she could have done more for her team at her position.  She felt like it was unfair that she didn’t get to play.  She thought she had earned it.

To be honest, I agreed with everything she said.  The last month had seen Macy blossom into an extremely competitive soccer player.  If I were making the decisions, Macy would have played defense and she would have played a lot more.  I’m biased, sure, but it’s the way I would have done it.

Then Macy said something that will stick with me for a while.  “I’m going to practice hard this summer.  I’m going to make it so she can’t take me out in the championship next time.”
Woah.  It reeked of personal accountability out of an eight-year-old. It was a proud papa moment.
The lesson here girls, Macy has already learned it.  It’s fine to see something as unfair.  Heck, it may very well be unfair.  Feel free to hang your head for a little while if you need it, but when the pissing and moaning are over, what can you do about it?  For Macy it wasn’t a pity party.  It was a challenge.  To her, the gauntlet was thrown and she intended to come out on the winning end next time.

There is something else here as well.  Macy, your team won the tournament and they wouldn’t have been in the game if any of the other games had gone any differently.  If you hadn’t tied the number one team on Saturday or if you had given up a goal in the first game on Sunday, your team probably wouldn’t have been in the position to play in the final.  You were a part of it, a really big one.  So pat yourself on the back, you did great, but the goal is set up in the back yard, sweetheart, it’s time to make it so you play more next time.
Posted by chrisliam at 11:08 AM