I haven’t written here in a while.  Frankly, I’ve been working on another project and this time of year tends to be crazy with the girls and soccer and school wrapping up. True, that could be said of the beginning of the school year, or the holidays or spring break.  Suffice it to say that I am a very busy guy.  That being said, imagine my surprise when my wife asked me to help her with her company’s volunteer day.

Admittedly, I wasn’t interested.  I had a lot of things going on and taking an entire day out of my week didn’t feel like the best idea.

Then she said it was for the Special Olympics.

I worked with the Special Olympics years ago, through a baseball team I was on.  I enjoyed it and always said I’d like to do more with it, but like so many things for me, life got in the way.  Once I agreed to do it, I was thrilled to be a part and looking forward to it.

A quick shout out to my wife’s company, Keller Williams Realty Partners, for sending 50-ish volunteers to the event.  Another shout out to OtterBox.  They went above and beyond making it a great event for the kids.  Nice work Otter-folk! 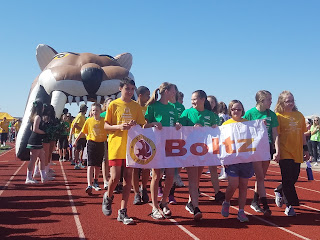 Back to the story.  My wife and I were assigned to a team from local junior high school and we waited for our athletes.  The times I had done this in the past I was on lunch and water duty. This was the first time I was assigned to specific athletes. It was exciting but, honestly, I was a little nervous.  I didn’t know what my responsibilities would be.  What if I miss an event that a kid was supposed to be involved with? I didn’t want to do anything stupid and have my inexperience take away from someone’s day.  My nerves were settled very soon.

That nerve settling brings me to the point of this story.  At the Special Olympics, it’s easy to find people to celebrate.  The athletes are remarkable.  Watching someone compete, to push themselves purely for the joy of the experience is soul cleansing.  But this story isn’t about them (which may be the most awkward thing I’ve ever typed).  The companies involved participate in an act of pure generosity.  There isn’t a huge ‘look at us’ moment with their contribution.  They don’t brand the event with banners and beer cozies.  It’s a warm fuzzy moment for a few companies that do things right, but it’s also not a story about them.  The volunteers are great.  Like me they lead busy lives and giving up a day means something.  It means they care about their communities.  But you guessed it, not about them either.

As my wife and I stood there, holding a banner for Boltz Middle School, a group of forty or so competitors approached all wearing the same yellow shirts.  Their shirts would identify them by school making them easier to spot. But each yellow shirt was accompanied by two green shirts.  The mass moving towards us was impressive, but I didn’t understand who the green shirts were.

As it turns out, the green shirts were kids from Boltz Middle School assigned in pairs to assist each athlete.  As the kids approached, we high fived them and smiled but realized that our team was both large and a bit unruly.  They were excited to compete, and a few had behavioral issues that being in a group this big triggered.  One of those athletes was a young girl who clearly didn’t like the noise and the cheering and became agitated and withdrawn.  As she grew more upset, I watched two young women, her classmates take her hands, sit down with her, talk calmly and turned the athlete’s agitation to laughter.  It dawned on me, in that moment, that these young girls weren’t helping for the day, they were helping for the year.  They were friends. I started looking at the mass of people differently.  It wasn’t a large group of competitors and young volunteers, it was small groups of peers. There were people with physical limitations with kids who knew exactly what help they needed and people with mental disabilities that required constant engagement, or calming, or monitoring and each ‘peer partner’, as I would learn they were called, knew exactly how to help.

Maybe I shouldn’t have been so enamored.  Maybe it shouldn’t be surprising to see that many kids acting altruistically but it was.  As I looked around I saw hundreds of Special Olympics athletes and twice that number of peer partners.  I felt happy and small all at once.  What I also felt was useless.  These young people had the situation locked up.  I really wasn’t needed.  My wife went to the woman who was leading our school and asked what help was needed.  She said that they need help keeping the kids hydrated and the it would be great if we would be willing to take pictures of the kids participating in their individual events.

Long story short, or at least less long, it was a wonderful day.  There were smiles for miles.  I left feeling warm inside.  I suppose some of volunteering is how it makes you feel inside, but I’ll be honest, what made me feel good was the peer partners.

The point here, ladies, is a simple one.  Give of yourself.  It feels great.  But also, you’re going to hear a lot of people say things like “kids today” or “millennials” in a not-so-nice way.  That is lazy thinking and complete, unmitigated, unadulterated, unvarnished bullshit.  I would imagine that the 80 students that volunteered themselves is a reasonable percentage of the students of Boltz and not at all indicative of the number of kids who are willing to help out.  Feel free to let grown-ups underestimate you but know that you can do remarkable things and your age isn’t a barrier for that.  I have watched you and your classmates be better than mine were.  You are kind people that don’t seem to see the differences between one another as readily as the kids I grew up did.  Keep that part of you and use it as you get older.  Maybe you can fix some of the things my generation decided to screw up.  Thanks in advance.

Final note, if you need a phone case, try OtterBox, if you are dealing with real estate, consider Keller Williams Realty Partners.  Obviously, I have some interest in the latter, but I can speak from experience, they are companies that are giving back to your community.
Posted by chrisliam at 11:27 AM