I have long since assumed that the child of mine that will cost me the most hair will be Macy.  She is adventurous, brazen, curious and more than most kids, is willing to accept the punishment if the joke is funny enough.  An example this last point happened just yesterday morning.  Macy woke up earlier than the rest of the house.  I’m assuming that her thought process went something like this.  “Why is everyone sleeping?  Who is least likely to kill me if I wake them up?  I wonder what he will make me for breakfast.”  With that, she crawled next to my bed and found my pajama clad posterior sticking out from under the covers and gave it a firm slap.  I shot out of bed to find her giggling into her hand under the side of my bed.  Giving her the “she’s not a closet serial killer” benefit of the doubt, I see her as a little girl who is destined to grey what hair I have left on my balding head. 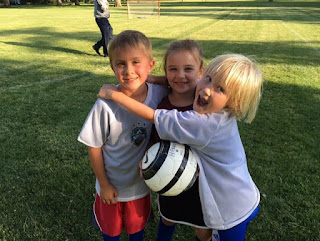 All of that being said this is not about a slightly reddened hind quarters or a lack of sleep.   It’s about something much, much worse for my hairline.  Macy, fresh out of kindergarten, asked a question that most dads don’t want to hear from a girl twice her age.  It was asked in this awkward kind of way that said that she didn’t’ know what she was asking or what it would do to my soul.  I was getting Macy into the minivan after a post soccer season party and she asked, in an innocent voice as the van door began to slide closed, “Daddy, before you have a baby do you have to sex mommy?”

The door continued to close and I physically saw my dropped jaw in the window reflection.  I’ll chalk that up to something else I saw as just an expression.  My jaw dropped, completely.  I have always seen myself as someone who thinks on their feet.  I regathered myself for a moment and scrambled for something to say.  I pushed the button to re-open the van door and found a curious little girl waiting behind it.  My exact response went like this, “Well, sweetheart, where in the hell did you hear that?”.

Parenting 101, if you have nothing to say, lash out.  Punctuate it with a mid-level kid level swear word for effect and then close the door rapidly.  Lash out, check.  Mid-level swearing, check.  Door closed…damn.  The only change in the van was the fact that my eldest’ s attention went from some trinket she had received at the party to trained perfectly on my next words.

I repeated my former statement, in a softer tone, at the car in general.  “Where did you hear that?  Was it at school?”

“No”, she answered reluctantly, “It was (The name of the junior sex ed teacher has been changed to protect her from Macy’s uncles) Cinnamon.  She told me at Avery’s birthday party.”

Avery rose in her seat looking confused, angry and right at Macy.  I saw a window to divide and conquer.

Before Avery could offer her vehement denial, Macy piped up proudly, “No it was just me and (insert two other girl’s names here).”

As far as I could tell the disease was contained to one set of local ears and two other pairs that I had no control over.  I quickly went from father to outbreak prevention specialist.

My wife gave me a look as if to say "good luck with this one, champ.", arms crossed and cocked smile. She wasn't stepping to save me.  At least not yet.

What came out of me was somehow both convoluted and vanilla.  To paraphrase, "Well, um, sweetheart, when to parents love each other very much, it's like this, see, it was just stuff you hear at a birthday party, geez, well Mommy and Daddy, you're too young to be asking...." the last part of whatever I was saying was drowned out and eventually deafened by the automatic sliding door.  The trump card I had on my wife was the fact that we came in separate vehicles and the kids were piled into hers.  Unfortunately, the reprieve was a mere two blocks.

Truth be told, when we got home we had a very mature conversation with our eldest two children.  We explained that 'what she heard was correct, but it isn't time to learn about it just yet.  It's a conversation for later, but that we love them very much.

So here it is girls, over the next forty or fifty years, I will be making a lot of jokes about how boys are off limits and that I'll sharpen my gun in preparation for any gentleman callers.  I'll say you can't date until you get through college and any boy dumb enough to try to kiss you will have the full force of Poppy, your uncles and yours truly to deal with.  That, my ladies, is what you call a show.  It's because I love you very much and I will never think that there is a special someone quite special enough for you.  I'm biased, sure, but you three are pretty amazing and deserve the best.  If you take anything from this story, it's just that the question Macy asked is valid, just premature, ask me again in twenty years if they have phones in the convent.
Posted by chrisliam at 9:00 PM