It’s been told to me never to talk religion or politics in polite company and in the spirit of adhering to good advice I intend to talk about religion and politics today.  While I can feel eye rolling from here, it isn’t what you think.  There will be no moral high horse or party divisiveness.

I am the father of three wonderful girls.  They are smart, caring, funny and beautiful.  Years ago, when my oldest daughter was very little, my wife and I decided to explore a church to attend.  We decided that the church had given each of us structure and perhaps my kids would be better off with a little structure themselves.  The problem was that my wife was raised Lutheran and I was raised Catholic.  My wife and I jokingly discussed the infallibility of our own denomination while simultaneously downgrading everyone else’s.  Honestly, we talked about our churches the way one would talk about their favorite football team.  Go Catholics!  This dance went on for years before our first daughter was born but came to a critical mass when we needed to decide where our children would attend service.  In the spirit of accuracy, this last sentence should read “where our children would attend their occasional service” as life gets in the way more often than I’d like to admit. 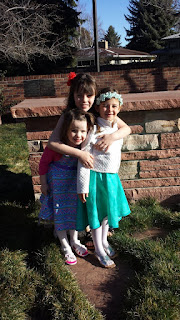 My wife and I decided that we would like our kids to have some religious upbringing but could not ask one another to convert to each other’s denomination.  Looking back, our decision to interview priests and ministers for the job seems strange, but trust me, it was much stranger at the time.  Adrienne lined up three or four meetings in our living room for the same afternoon, one after the other.  My greatest fear was having them overlap and having the awkward moment of ‘Father Mike’ and ‘Reverend Dave’ duking it out in our foyer for our immortal souls.  Little did I know this would not become even close to the problem.

The first gentleman came in and, after some pleasantries; he asked “What are you looking for in a church?”

My response was simple.  “If my daughter wanted to advance in your church, how high could she go?”

He replied that she could become a deacon or the like.  That's it, a deacon.  Not a priest, not a bishop, not a cardinal.  My wife, smiled politely, and in words that were as PC as they come, invited the man to leave.  This happened a few times, with only one putting up a fight.  He was perplexed by the fact that there was an artificial ceiling that would restrict my child and that it would be upsetting to my wife and me.   I’ll give him his moxie for still selling, but he was in an unwinnable position.  Over my life I have watched the women around me overcome barriers like this or be victimized by them.  I would not knowingly put my daughters in a situation where they would be restricted by design.  My wife agreed and we eventually settled on a congregation that puts zero restriction on who can minister, and then we attend said congregation mostly on Christmas and Easter.  In hindsight, it was a lot of hullabaloo for two hours of meetings annually.

This brings me to the point of this posting.  Like some religions, politics can be a stacked deck.  However, something changed just recently.  Last night Hillary Clinton clinched the nomination for the Democratic nomination.  Politics aside, it should be a proud moment for this country.  In the fifty-five ish presidential elections this country has held, no major party has ever run a woman as its candidate.  Fifty five elections, well over one hundred candidates, zero women.  As a father, it is very difficult to say to my daughters with a straight face that they can be anything they want if they try hard enough.  110-0 is tough math to overcome.

So here’s the thing girls; in your short lives, you have seen some amazing things.  Our current president is the first African American president ever.  Hillary could be the first woman president ever.  Forget politics for a moment and breathe that in.  The ceiling seems flimsy compared to what it was just a generation ago.  I’m hoping that the future is different for you girls.  I’m hoping that the idea of a woman, a minority, or anyone who is marginalized for any reason seems silly.  I’m hoping that for your future, but it isn’t what has happened in the past.  I’m sure your mother, your aunts and grandmothers will shed a tear over the coming months as they recognize the significance of what has just happened.  As of last night, Avery, Macy and Darby, I can say with a lot more confidence, you can be anything you want if you try hard enough.
Posted by chrisliam at 1:37 PM