The Misadventures of Starchild Bumblenuts


So girls, most of the stories to this point have pointed towards your successes, towards your wins and how to repeat these things in your later lives.  This one speaks directly towards one of your less than stellar moments.  As it turns out you can learn from your failures too.  This story points to the greatest of these failures we have experienced so far.  Daddy always loves you, but some days, just a little less than others as it turns out. 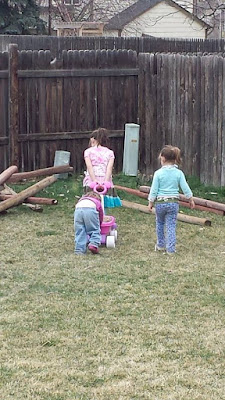 This past summer we had a steady babysitter, who was, by all measurements a  fantastic babysitter.  She was a little more "earthy" than my wife or myself but the both of us felt that exposure to an example to someone with a different perspective would open their eyes to a new world.  She was creative, adventurous and taught them a lot.  The problem was that she was beholden to another family and also going to school.  That meant that while she would maintain her normal schedule she was not available in emergency situations or when mommy and daddy needed a break.  Enter Starchild Bumblenuts (name changed to protect the dipshitted).  Our babysitter mentioned that she had a friend that could use a few hours of work here and there and that she trusted her complicity.  In hindsight, it was the equivalent of someone recommending "Pearl Harbor" as the best movie they have ever seen.

My radar should have gone up for me the first time she watched the girls when we returned after a night out and the little ones had leveled the bottom floor of our house and been awake much later than their pre-designed bedtime.  Adrienne said that we couldn't use her anymore but I dismissed it as a "feeling out process" and that she was probably fine.

Fast forward to the next time I suggested that we use Starchild.    Starchild jumped at the opportunity and my wife and I went to work without much hesitation.  The only saving grace for Starchild Bumblenuts is that I was the first one home.

So when I got home, Mrs. Bumblenuts was waiting by the front door.  Clearly I missed the first sign.  She stated that the girls had been very good, and that they had explored their creativity, and that the hoola-hoop she had brought with her was in the backyard and that the girls could keep it.  From there she took her cash and left skid marks out the door, I had just missed sign number two.  As I walked into the house the first thing I noticed were purple footprints all over the carpet (which I would learn was food coloring).  I would surely have noticed other damage to the interior of the house had it not been for my middle child trying to hug me completely covered in Crisco.  The rush of confusion, laughter, anger was an indistinguishable cacophony of emotions.  It was a like being hit with a bucket of water, but it was mild in comparison of the reaction I had when my eldest approached.  She was head to toe in Crisco, smattered with oatmeal and, what is that, corn meal?  I didn't know we even had corn meal.  They were dressing up as zombies.

I needed a moment.  I walked to the backyard as a reprieve, mistake number three.  The girls grandparents had invested in an amazing swing set which was now blanch white in Crisco which, to date, even a power washer cannot make amends.  The deck had been covered in paint and the lawn was strewn in the empty containers of the food-stuffs that had been used to destroy all it came across.

There was a confusion, I couldn't sit them down to yell at them as they were covered in a baker's nightmare, I couldn't shake sense into them and I couldn't retreat into my bedroom and curl into a fetal position and wait until mommy came home.  So I said the most base level thing that came to my head; "Just because the babysitter is an idiot, doesn't mean you can be too".  Poor verbiage, sure, but considering the circumstance, I hover somewhere between regret and justifiable stupidity.

So girls, the lesson here is twofold.  Obviously you can't do whatever you want regardless of circumstance.  Just because someone gives you carte blanche doesn't mean you should take it.  The age old axiom, look before you leap comes to mind.  But more subtle is this.  Sometimes people work really hard to give you the things you have.  Mimi and Poppy wanted you to have something nice and your actions showed less than little respect for it or them.  That applies in a lot of places.  When people give you something, or spend time with you or do things to make sure your life is a little better, it is your obligation to show them the gratitude for their gifts.  Generally speaking, you are the most generous thoughtful girls on the planet, but never forget that your actions are what defines you.  The swing set gift helps define your grandparents, your treatment of it helps define you.  Trust me, little ladies, you have shown a lot more of the good than the bad, but you'll do yourself a service not forgetting the times where you don't live up to your own expectations.
Posted by chrisliam at 6:36 AM