Macy the Zombie and Avery the Soccer Player 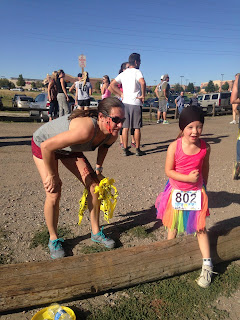 Last week Macy ran her first 5k.  It was a "Zombie Run" where each runner wears three flags and try to run from zombies trying to steal their flags and making the runner into a zombie themselves.  At five years old she was the youngest competitor and for her age she did fantastic.  While Macy was awesome, the point of this post has more to do with her sister Avery than Zombie Macy.

Initially, Avery was signed up to do the Zombie Run but she was unable to run it.  She had trained for her run as much as an eight year old would and was geared up and ready to go.  She had considered costumes and elected for practical running gear and a tutu, less for flag protection and more for flair.  She was trained, she was styled and she was ready to go, unfortunately , much like they do on my college football watching, the soccer gods frowned on her preparedness.

Avery had been signed up for the race before the seasons soccer schedule had come out.  As luck would have it, her first game fell on the same date...at the same time as the Zombie run.  Both my wife and I were torn on what she should do, Avery was less torn and more destroyed by the conundrum.  In a fantastic parental cop-out we elected to let Avery decide, not without guidance, but it was up to her.

We discussed it over dinner with her and through her tears she decided that she wanted to do the run and that we would call her coach and let him know.  My wife leaned towards her playing soccer, I leaned towards the run but we both decided that it was her choice and accepted it.  That night, Avery went to bed crying and upset that she would miss her game, and an opportunistic Macy was crying because she wouldn't get to fill in for Avery at the race. 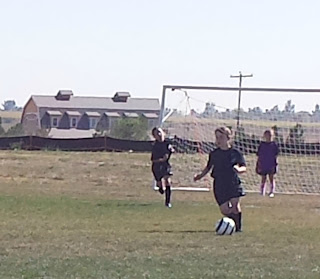 When I woke up the next morning, I would get a lesson from my eldest child.  Here is where I would usually give the lesson for my daughters grab onto.  Today, it is a lesson I was given by Avery.  That morning, over Eggo's, Avery let me know that she had changed her mind.  Her explanation was simple, "if I miss the run I'll be letting myself down, if I miss the game, I'll let my whole team down".  From the mouths of babes.  She was willing to give up the race she had trained for to play one of ten soccer games she would play this fall.  The lesson is this, to my wife it was more important for her to play soccer, but what was probably for the wrong reason.  She was worried about what it would say to the coach if she missed the first game. To me, she had earned the run and missing one game wasn't a big deal.  Congratulations Avery, today you are the grown up.  Both mommy and I are impressed with your decision and your reason.  P.S. you are signed up for the Hot Chocolate run the week after your soccer season ends so get running little girl.
Posted by chrisliam at 2:54 PM