This is the last soccer post I will have for a little while.  The season is over as is tournament weekend.  In a previous post I mentioned that we were one weekend away from a chance at an undefeated year, for all three of the girls.  That weekend came and went and the girls remained undefeated.  It was a fun season.  Tournaments can be different.

Tournaments tend to be a place for the best teams to showcase their skills.  It is a place where an undefeated local team can get their doors kicked in on a bigger stage.  A place where dreams of grandeur meet the nightmare of reality.

My wife and I are well versed in this.  In years past, Macy, my middle daughter played for a team that was the deliverer of reality to unsuspecting teams.  My eldest, Avery, has always been the recipient.

Macy has a shelf full of trophies and medals from tournaments.  These are not participation awards.  They are bonafide articles of battles won.

Avery has always looked longingly at that shelf. 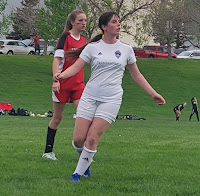 She had a great season and declared in the days leading up to the tournament “I’m coming home with a medal”.

Poor sweet Avery.  Her teams, in the half decade she’s been going to tournaments, has won just one single game.  Just one.  I loved her attitude, but the odds were stacked in the nightmare’s favor.

My wife was out of town running a trail race in Moab (a story for another post) so I knew it was going to be me to wipe the weekends tears.  The first game was against a team that they had beat during the season. We had a feeling that they would win their first game, but it would get dodgy after that.

We were right.  On the first day of the tourney, they won their first game, 3-0 and Avery played well and had a goal.  The second game that day was tougher.  It took a late goal to earn a tie.  The girls looked a little out of their depth.  They may have been a little lucky.

Avery was a bag of nerves that night.  She had hurt her foot and was concerned about her ability to play at the level she wanted to. We stayed in a hotel with the team and being surrounded by her friends on the team was a pressure relief valve for her but her “taking a medal home no matter what” proclamation had lost its luster a bit. There was some positive math for the team.  If they won their next game they would make the championship game, and more importantly, if they make the championship game they get a medal, it may be silver, but it’s a medal none the less.

Avery was nervous when she woke up.  We went down to breakfast and Avery sat quietly eating a bit distracted.  We talked but she was absent.  She got dressed and we made our way to the field.

I saw something I don’t see in Avery very often.

I watched her settle herself.  Her face went from “all nerves” to “business”.  The game wasn’t five minutes old when Avery scored.  I may be a little biased, or completely so, but I believe that the early goal set the tone for the game.  The team won 7-0.  The girls played great.    They were in the championship.  Avery would get her medal. 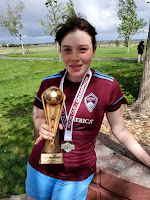 That wasn’t enough for Avery.  In the championship, Avery would score the team’s first goal again.  They would go on to win the trophy.

Her smile was ear to ear, as was the rest of the team’s.  There was no clear MVP.  Everyone had played hard.  Everyone contributed.  They had exceeded their own expectations.  It was great.

The lesson here, ladies?  First of all, set your own boundaries.  If I were honest, I didn’t think you guys would bring home a medal.  Thank goodness you didn’t think the way I did.  Secondly, and most importantly, its about rising to the moment.  There are moments in your life that you either sink or you swim.  Moments that you will remember for the rest of your life, with joy when your succeed or with regret if you crumble a bit.  It makes me proud that you made your declaration and then backed it up.  I’m proud of you, regardless.  In that I am totally biased, but last weekend, you put an exclamation point on it.  You played well, you were unselfish and you were a leader.  I would have been proud if you didn’t win a game last weekend.

But you did win a game last weekend.  A bunch of ‘em.  So, congratulations, sweetheart.  You’ve got your medal.  I hope the achievement outshines that little piece of metal.  Probably won’t bet here’s hoping!

Posted by chrisliam at 8:37 AM