If You Can't Trust Saint Nick...

SPOILER ALERT: Anyone under the age of 12 should stop reading this immediately or risk growing up too fast.

I’ll pause for a moment.

That should clear out the stragglers.

So, this year, as we do every other year, we spent Christmas with my in-laws.  My in-laws live in a small mountain town that exemplifies a country Christmas and is as enjoyable as it is picturesque.  While lovely, it is important to this story to understand that spending Christmas in a small town requires a sacrifice here and there.  The biggest of such sacrifices is the fact that you had better be fully prepared for Christmas before you arrive.  Because of its size there is no mall, no box stores no place to do last minute shopping.  It is also remote enough that you cannot rely on shipping from the Amazons of the world. By the time we arrived it was already too late to ship anything.  This is key to the story.

What is also key to this story is I set extremely lofty goals for myself for 2019 and am falling short.  That fact has led to a Chris that has been less than gung-ho about this particular holiday season.  In this, I probably haven’t been as helpful to my wife this Christmas as I have been in year’s past.

The culmination of all of this is the fact that a single gift was left behind.  Four hours from home and an important gift to my middle child, Macy.  It was the single thing that she asked Santa for ( a mistake I will not make again). 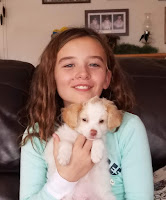 Macy is a sweet child but often has a personality that believes that the world is conspiring against her.  In the rare event that her soccer team loses, there is always a reason; it was the officiating, or the other team played cheaply.  If she does poorly on a test its that it wasn’t taught well enough.

Not a chance she would take the missing gift well.  Damn it, Santa.

Here’s the rub.  The girls are allowed to wake us up on Christmas morning at 7:00 a.m.  We discovered the missing gift at about midnight Christmas eve.  My house is four hours away.  The quick math said that I had eight hours of driving that I needed to make over the course of seven hours.  I was willing to try.  I made a cup of coffee and made my way outside.  Imagine my surprise when I discovered a couple of inches of snow on the ground.  The seven-hour drive would be impossible, as would eight hours.

We were done for.

We began to form a plan and landed on a poem, written by Santa, that explained that the gift had fallen from the sleigh, but he would have them at our house for when we got home.  We also had another gift that she hadn’t asked for to take its place thanks to my mother in law.  Macy believed it and was proudly showing her little Santa note to everyone.  I played along, all the time feeling guilty knowing my role in the missing gift.  It turned out to be a very nice Christmas despite my mistake.

The lesson here, little ladies?  Its tough.  As much as Mommy and Daddy want to be all in on every holiday and every birthday and every class performance and soccer game and anything else you are a part of, its not always possible.  I’ve been under a weird amount of pressure and maybe a little depression and consequently took my eye off of the ball a little.  I’m always sorry when that happens and am willing to take any proverbial seven-hour car ride to make it right.  Here’s the catch, sometimes a car ride can’t fix the issue.  Sometimes a Santa note can’t do it either.  Sometimes, people just fail and need to apologize.  That’s when it is up to you to realize that most of us would do anything not to let someone else down and that their apology is their last resort.

For Macy, had the note not worked, my gift would have been a heartfelt apology.  I would have hoped she would have accepted it.

I suppose that’s the lesson.  Realize that a heartfelt apology is often the worst-case scenario for the person giving it.  You should probably do your best to accept it, even if its a careless Saint Nick.

Posted by chrisliam at 6:53 PM