I Get it, Tradition Traditionally Sucks


I’m not at all one for tradition.  That’s not exactly correct.  I cannot stand tradition.  It comes from somewhere deep in me.  From my childhood.  What I remember from the times where this Chris was much smaller and less hairy is that tradition makes you do things you don’t really want to do.  It makes you do it annually.

Let me flesh that out a touch with an example.  When I was a wee person, we spent Christmas day at my mother’s best friend’s house.  It was a whole lot of grown-ups and my sister and yours truly.  There would be a series of small gifts exchanged.  I’m ashamed to admit that I always loved my $5 McDonalds gift card.  They gave me a sense of power, but that’s a different story.  After gifts we would turn to Christmas dinner.

This is where tradition became a nuisance.  My sister and I were sat at the kids table.  But we were the only kids.  So, the kids table would also be home to the impossibly old.  I’m sad to say that watching nonagenarians try to gnaw down prime rib led me to be nervous around seniors for years.  My older self can sympathize, seven year old me could not.

It was tradition, but it was the worst kind. 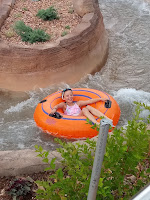 Which brings me to the point of this.  This past weekend we brought the girls to Glenwood Springs.  I’ve written about this trip before. When I was a kid it was an annual trip for my family.  In my youngest days of the trip it was fantastic, but as I got older, perhaps my early teens, it seemed a burdensome tradition.  I failed to recognize a ton of key truths about the annual jaunt up the mountains that I see much more clearly as the parent that was dragging his own kids up the mountains.

There’re the minimal things that go into it: the organizing the trip, the cost, the long drive.  All of them have their issues but in reality, none of it is too much trouble.  The real thing is realizing that the trip isn’t just for the kids.  It’s a chance for the adults to relax, to play with their children and to spend time with them that isn’t driving to soccer practice or cleaning the house.  When I was thirteen, I’m sure I didn’t recognize this part of it.  I remember the four-hour drive seeming like twelve hours.  I remember the rooms without air conditioning.  I remember the long lines and the lukewarm tuna-sandwiches.

What I failed to remember was the things my mother did to make it happen.  Like the car breaking down over Vail pass and the cost of getting it fixed and the hotel while we waited for the repairs.  I didn’t remember the canyon was always under construction and it would have been easier for Mom to skip the trip altogether as opposed to listening to the griping kids in the back seat.  I forgot that, while the hotel had no A/C, it was connected to the pool and, while more expensive, it made for many more hours of fun for the kids.  I couldn’t possibly have remembered that the lines to the rides were rides that cost a lot of money and our complaining about it was a slap in the face to the poor woman who purchased them and the tuna fish sammies were a means of controlling costs as to not take a family of four out to eat for every meal that we ate. 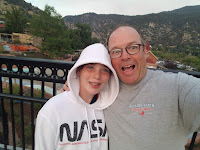 I suppose the biggest thing I failed to recognize is that some years the trip wasn’t affordable, or time was too thin, or we complained too much, but Mom still made it happen every year.

The lesson here little ladies?  I suppose its about tradition and my loathing thereof.  I guess, from my point of view, its okay to dislike some tradition but its important to look at the reasons for the tradition in the first place.  When I look back at those Christmas dinners, I have always looked at it through my own eyes.  A little change of perspective may offer a little insight into why we did it for all of those years.  Maybe it was that my mother simply wanted to spend time with her best friend, or maybe she assumed that we loved it.  But I think, if I looked at it honestly, it was that a single mother that wanted a little company on Christmas.  Her kids were occupied with toys and simply sitting and drinking coffee with friends was preferable to sitting at home.

I think you girls had a nice time this weekend, but as the years roll on, maybe there will be a time when it won’t be as fun.  Maybe you could do your old man a solid and put a smile on anyway because he wants to spend a weekend having fun with you.  In exchange, I’ll promise to try not to embarrass you with my killer cannon balls and jack knifes.  Deal?