The Rattler: Fun for the Feeble Minded

I ran a race this past weekend.  I trained for it from early January and began to get excited/ nervous as the big day started creeping up.  The race, The Rattler, took place in Colorado Springs and is a 15.5 mile trail run that I thought that I may be a good target for the first quarter of the year.

Turns out, The Rattler would be the single most difficult undertaking I have ever paid to participate in.  Admittedly, I don’t have a solid point of reference, but I assume it to be much tougher physically than childbirth.

I knew going in that the weather was going to be a little rough.  It was.  What I didn’t consider was how bad the weather was going to render the course’s condition.  The mud on the course was uniquely clay.  It was made of the very stuff that Patrick Swayze and Demi Moore would have made sweet pottery with. Each step in this stuff created a weird suction that tempted shoe from foot.  When my foot disagreed, its reward was several ounces of tagalong mud.  Layers built up step by step, making my feet heavier as we went along.

Rain and snow made clothes heavier and made the first half dozen miles very chilly.  A slip in the mud three miles in cost me an iPod and a sweatshirt.  Losing the sweatshirt made me colder but losing the iPod let me live between my ears for the next several hours.  Losing the iPod was much worse.

Around mile 13 sat the final checkpoint.  It is the first time in any race I have ever run, that I considered quitting.  Had there been a way off the mountain that didn’t involve my feet, I may have taken it.  There wasn’t so I didn’t.  I pushed and finished. 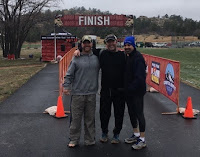 I didn’t set any records, not in a good way anyway.  I came in around 100th out of 150 finishers.  I came in a full half hour after my running buddies (they had beer, so I think they didn’t mind).  My initial reaction after finishing was “that’s a one-time deal, never again”.  Often times, finishing a race offers a feeling of euphoria with a smattering of pride.  This race left me feeling a little weak and disappointed in my performance.

Let me tell you something.  Running for four hours then being disappointed in yourself sucks.

There is a lesson in here, ladies.  The big takeaway is to give yourself a break every once in a while.  As I got a little distance from the race, I started to think a little differently.  We sat down for a well-earned breakfast and time with friends.  The benefit was two-fold.  Spending time with Katie and Jon and Randy after made me remember one of the reasons for running these types of races is the comradery. Talking with friends after about the race and how tough it was is fun.  A shared experience like The Rattler leaves plenty of room for self-depreciating jokes.

There is also the accomplishment.  Four hours of trudging around the mountains in the rain is hard.  Doing it in the rain and snow complicated it.  Maybe I didn’t get the time I wanted and maybe I can allow myself to get down on myself a little bit about that but in the big picture, I accomplished something difficult.  I trained for a few months for it which in itself is difficult.  If you can’t celebrate your victories, even if they come with a bit of an asterisk, then you may not be prone to tackle the next one.  So, maybe this thing wasn’t a “one and done” experience.  Maybe I’ll see The Rattler again next year. Never can tell, but I won’t rule it out just yet.