"The Talk", a Grown Up Post by a Semi-Adult


It was a big week for my little family.  Soccer season ended, for one thing, but something much bigger had to end as well.

My wife and I had known for a long time that it was time to have “the talk” with our eldest, Avery.

Avery is in sixth grade and is sweet and generous and innocent.  She doesn’t talk boys or makeup and only got her ears pierced a few months ago.  She is exactly the kind of girl a first-time dad would ask for.

But still, it was time for the talk.

My wife and I decided that it would be best to do this sort of thing over breakfast, out of the house, without her sisters around.

Some would say that having this sort of talk may not be best suited for a restaurant, you know, because of her reaction, and subject matter, and mostly because of Dad’s reaction.  The fact is that I had been prepping for this conversation for half of a decade.  I was ready, Mommy was ready, and we hoped Avery was, too.

We sat at local, Dr. Seuss themed restaurant, because Fort Collins is awesome.  My wife and I ordered coffee and out breakfast and we let Avery order whatever she wanted.  She opted for a hot chocolate and a combo meal with bacon and sausage and eggs and French toast.  Where did the little girl go that insisted on ordering the Green Eggs and Ham?

We waited for our drinks to arrive and began our talk with our little girl.

“Sweetheart” Adrienne began, “You’re getting older and there are some things you should know.”
Avery looked nervous.

“You know how sometimes mommy and daddy stay up later than you do?” Adrienne advanced.

“Do you ever wonder why?” Adrienne asked.

“Not really”, it became clear that Avery had no interest in pursuing this string of conversation.

“Well, there are certain things that only happen at night” Adrienne said. 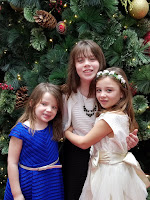 Avery is very innocent and we feared that she would be one of the few kids still genuinely believing that there is a man that would be shoving his expansive posterior through my flue.

I was wrong, completely.

Instead of tears or doubt we had a calm “I know.”

Both reactions would be short lived.

“How’d you figure it out, sweetheart?” I asked expecting to hear that some little jerk at school let her in on the secret.  Not so much.

“We’re pretty relaxed as a family but not every family is that way.” She answered.

“What do you mean?” I asked genuinely confused.

“Well, some guy coming into your house without being invited is breaking and entering, right?  So, we’re okay with it, but not every single family out there would be okay with it.  Someone would press charges.” She offered matter of factly.

The lesson here, girls?  Admittedly, daddy is reluctant to let you grow up, mommy too, just not as much.  Because of my reluctance I may not notice that it’s happening, selective attention, I suppose.  If I’m missing something I shouldn’t be, don’t be afraid to let me know.  I’m trying the best I can but in the grand scheme of things, I’m pretty new at this.

All of that being said, I’m serious about the 23 years till the ‘birds and the bees’ thing.  If you want that talk sooner, ask your mother.
Posted by chrisliam at 11:41 AM