Yesterday was Father’s Day.  It was a good one.  My girls got me a Star Wars Bobble Head, a desktop air-hockey game and a placard that says “World's Greatest Boss” despite my being the boss of nothing and no one.  I started my day with a nice run and went and got some bagels.  I won a free coffee at the bagel shop for answering their trivia question.  It was shaping up to be a great day.  I had an early dinner with some family and finished the day with a Ferris wheel project with Avery and Macy.   I spent my day feeling loved and appreciated.  Not that that is unusual, but it was magnified and wonderful. 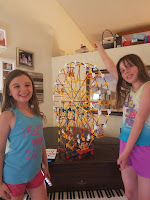 But I’m never one just to appreciate a happy moment.  Of course, it has to be analyzed to death.
First of all, I am now at an age that a really nice sprinkler is a boffo gift.  Chris from 1996 would be embarrassed for me.  Chris of today thought it was great.  Thanks darlin’.

But the bigger picture came from a couple of sources.  I thought about the fathers that I knew and what made them special.  The first was talking to my father-in-law.  I called him to with him a happy Father’s Day and we talked for a few minutes.  We are cut from different cloth, but I admire him and enjoy the time we get to spend together.  He’s fun and a great grandpa to my kids but that isn’t what I admire the most.  I truly admire his willingness to take a risk.  It is something that I am never comfortable with and to watch the seemingly effortless abandon he takes risks with is inspired.  That is not to say it’s done willy-nilly.  He was a fire chief for decades, but he also appreciates that you only live once and the value of doing what makes you happy.  He is a guy that at one point was better at sinking that swimming but decided he wanted to try scuba diving, so he began taking swimming lessons at fifty-ish years old.  I’ve seen him work in Belize, transport RVs and now oversees a private fishing ranch.  None of this would have been possible for him if he was content sitting on his laurels.  His influence is obvious in my wife who occasionally needs a talking down from major career and life changes.

Later in the day I got a text from my brother.  He said, in a rare moment of sincerity, that we have both done a good job as dads.  We are also cut from different cloth but I admire him and miss him as he lives halfway across the country.  In my younger days there probably wasn’t anyone I learned more from than Steve.  I followed him around in person and mimicked his habits when he wasn’t around.  I played baseball less out of a passion for it and more out of a desire to impress him.  He is funny and compassionate, and I enjoy whenever we get to see each other.  What I admire most, however, is his follow through.  See, the golden boy is a doctor and a lawyer, making it impossible for myself or my sister to register on the “favorite child” radar for the better part of the last twenty years.  Thanks for that, Steve.  But that follow-through is evident in all areas of Steve’s life, but no where more transparently than his kids.  He is a great dad who has a pair of kids who look up to him completely.

Like most little brothers I spent most of my life trying to compete with my older brother but when it comes to parenting, I simply took notes.  Side note, I am a much better golfer than Steve and he would be lying through his teeth if he said otherwise.

This morning all of this got me thinking about my own father.  In my youth, we didn’t always see eye to eye.  You see, more than my father-in-law or my brother, my father and I were truly cut from different cloth.  It wasn’t until we were both older that we got on the same proverbial page but in my teens and twenties we had some problems.  Most of it stemmed from expectations and I suppose, being from different upbringings in different times.  My dad grew up in a time where a person was valued by their work and ability to provide for their family.  I grew up, for the most part, around my mother, who preached creativity and doing what makes you happy.  I took that ball and ran with it, all the way to an English degree, which is every bit as useful as a degree in a language you already speak can be.   We butted heads about it for a long time.  There were other things as well, but I guess this is probably the overriding issue.

As we both got older, I think I better understood where he was coming from.  He had struggled and didn’t want the same for me.  One of my favorite conversations I ever had with him was after he had gotten sick. We were sitting enjoying a beer that I’m sure his doctor would have disapproved of.  It was a conversation about our shortcomings.  He said to me that he wished he had been the type of father that I was.  He liked that my brother and I were as involved with our kids lives as we were.  He said that he envied our generation and how expectations had shifted for dads.  I told him that I would have been better served being a little more like him.  The aforementioned English degree is tits-on-a-bull useful and I wish that I had heeded his advice earlier.

I suppose if I had to say what I admired most about him was his willingness to change.  He was much better at it than I am.  Sure, I butted heads with him, but he went on to parent a step-brother and a step-sister of mine and became much more invested.  He became more invested with my siblings and me as well.  I think back about the times that weren’t as great and think of all the time we lost being stubborn.  I learned a lot from him, but I should have learned a lot more.  I miss him and days like yesterday drive that point home.

The point here ladies?  Give your old man a break.  He’s doing the best he can.  There isn’t a road map to being a great parent and more often than not I am flying by the seat of my pants.  Know this, I am never making decisions for you just to make life difficult.  If we don’t see eye to eye, I’m not going to back down just to make you happy.  It’s more important that I make you better.  I like being your dad, I like being your friend and the best times are when I can be both. That being said, sometimes I just have to be dad.  So, Macy, no, you can’t see the movie ‘It’ and Darby, screen time must be cut to 12 hours a day.  Seems like I’m the bad guy, right?  Maybe, but maybe you’ll get it later.
Posted by chrisliam at 11:13 AM