Tales of a Smart-Assed Dumb Ass

Like any father I worry about my kids as they grow older.  With my eldest, we had concerns with math and shyness, with my middle it was her ability to keep hands to herself and not solving her problems with fisticuffs.  Lately it’s my youngest, Darby.  Overall, she is a happy-go-lucky first grader who can find the fun in just about anything.  She’s cute as a bug and as smart a kid as you will meet.  Not that it’s a concept that I put stock in, but if there is such a thing, she is an old soul.  There is something behind her eyes that tells me that things need to make sense long before she is buying in blindly.  She is a great kid. 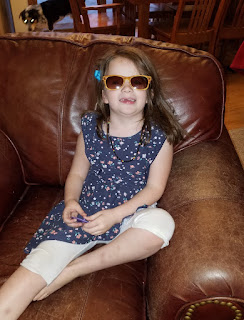 
This may come as a shock but I haven’t always been this put together (joke intended).  In my younger years, I went from shy to chubby to zit faced to awkward to college.  I spent my grade school years with a few close friends.  Being in Catholic school makes it difficult to determine if it was class size that limited my friend base or my penchant for Toughskin jeans.  Either way, I was a little fish in a little pond.  In middle school, I remained little in popularity alone.  The pond grew as did my waistline.  Most of the friends that I had from grade school went to a cross town middle school and I was more alone than ever.  What I found was that kids from public school already knew each other, cliques were already formed.  I spent those three years concentrating on baseball in the summer and avoiding bullies and avoiding girls the rest of the year.  High school carried many of the same problems but my weight went down.  I suspect that my weight loss would have helped my situation if acne hadn’t decided to rear its greasy head.


Truth be told, my senior year was okay, I changed schools and benefited from ‘new-kid syndrome’.  This is a syndrome where you can either be a total outcast or a total mystery.  Fortunately for me, I fell into the latter.  In the end, the scoreboard read, one good year, eleven somewhat miserable ones.  This is not intended to be a ‘woe is me’ type of story, but it is necessary to get the back story so you can see where I am coming from as it relates to my little one.


Long story short, I spent grade school and middle school wishing I wasn’t there and high school making that a reality.  I skipped class and took classes at the local community college.  A hearty mix of dumb-ass and smart-ass.


If I knew then what I know now, I wouldn’t have worried about it so much.  I still don’t have a huge group of friends, but the ones I have I would do anything for, and for the most part, I think they would reciprocate.  I don’t get caught up in gossip.  I’m able to draw very clear boundaries and limits with people.  All in all, if I had it to do over again, I wouldn’t.  I hated it like intestinal flu, but it made me stronger.

Which brings me to Darby.   I get it, sweetheart, I truly do.  I understand why you stand in line by yourself or only want to play with your one great friend.  Hell, I don’t fault you for any of it.  I’d be a hypocrite if I did.


Here’s the thing girls.  You may not need a huge group of friends, but you may want one from time to time.  The thing with that is to make friends you have to put yourself out there a little.  It’s not always fun.  It can feel like you’re faking it.  You might have to talk to people in line at school, you may have to join clubs or teams, you might have to ~gasp~ play with more than one person at recess.  You never know which ones will stick either.  Most of my best friends in the world come from job waiting tables over a decade ago. Those guys can be goofy, absentminded, hyper competitive and make jokes at my expense and frankly, I wouldn’t trade them for the world.  Just don’t tell them that.
Posted by chrisliam at 4:57 PM