Coach C or not Coach C...That is the Question


I coached my middle daughters soccer team the last few seasons and it has been a joy for the most part.  This season, however, was a little more challenging than most, not because of the kids, or the parents or anything dealing with the on the field activities, but because of new demands at work and ever increasing demands on the wallet.  I knew that the last game I coached Macy this season was the last I would coach her but I had decided that it would also be my last coaching altogether.   I figured that this would allow me a few more hours of work a week and every little bit helps. If I were completely honest with myself I would have seen that my heart wasn't completely into it either. 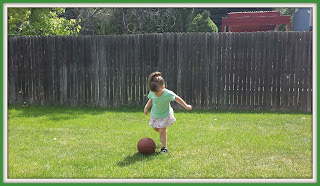 The problem with this is that my youngest, Darby, had already made the decision that I would be coaching her as she began her soccer career.  I knew this so I consulted with my wife and her advice was that we would find a way to make ends meet and that I would surely appreciate the experience again as I watched Darby grow into her own as a player.  It was sound advice.  It made sense.  But like so much good advice I have received in my life, I chose to go another direction.

Over the dinner table in our household, we have a daily talking point; "what was your worst thing that happened?" and then "what was your favorite thing that happened?".  It's a means of exposing the good and bad of our kids days.  Over one of these sessions we found out about a bully in our eldest daughters school (turns out the bully was just a little girl that lacked self control and "bullied' all of the kids and actually really liked Avery) and we always find out about hidden joys that struck our girls fancy (such as toe nail painting).  One evening I had made the decision that my "least favorite thing" would be the decision to hang up my whistle.   I had figured that it would be a way to open a discussion with my wife, and more importantly my youngest, that I wouldn't be coaching this upcoming season.   I geared up and searched for the words.  As luck would have it, there would be a preemptive strike.

For the last two years, when asked what her least favorite thing was, Darby would respond "Elmo".  I don't know why that is but she is nothing if not consistent.  This day she didn't answer with the name of a red muppet instead stating that her worst thing is that "Macy doesn't have daddy to coach her anymore".  It  was sweet.  It seemed to genuinely bother her that Macy would have a new coach.  Then the bomb dropped.  What was her favorite thing?  She answered, "that daddy would be my coach".

I'm no monster, despite what Avery thinks when we discuss the topic of cell phones and earrings.  Of course I am coaching her.  The take away from this girls?  All of us will struggle.  There will be times when you can't make ends meet.  There will be times when it seems easier to give up than give your best.  There will be times when you can justify disappointing those you care the most for.  Truthfully, all of that is okay...for a little while.  Then you need to gather yourself up.  You need to figure out what makes you happy, be it your children, your wife, or even watching four-year-olds run in circles on a soccer field.  And when you figure that out, it makes it tougher to give up than to give your best.
Posted by chrisliam at 11:57 AM